Exclusive: Sweden congratulates India for being the pharmacy of the world 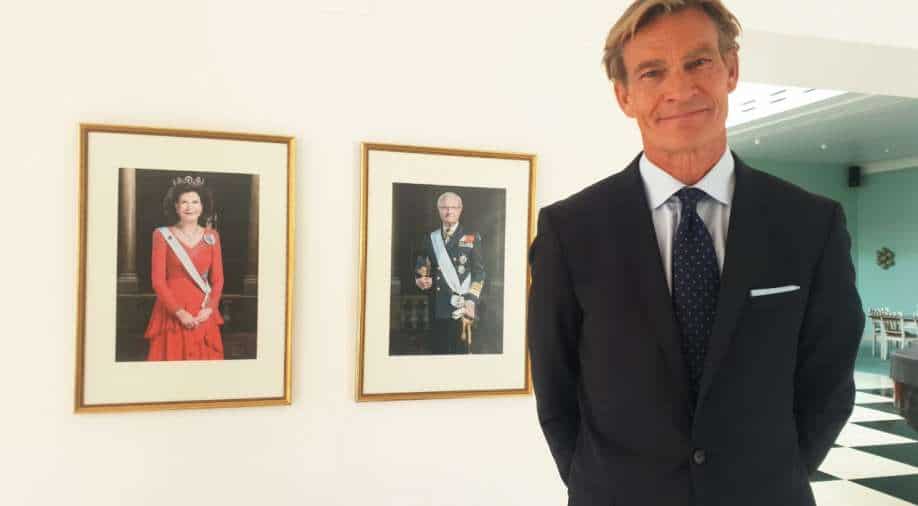 On recent allegations of a Swedish company being involved in bribes in India, the envoy said, "these issues are taken very seriously by the Swedish govt as well as the Indian govt, (I) am sure relevant authorities will look at this".

Klas Molin, Sweden's envoy to India, has said that his country "congratulates" India for being the pharmacy of the world, and appreciated how production and rollout of Covid-19 vaccines is taking place in India and how it is helping its neighbours.

On recent allegations of a Swedish company being involved in bribes in India, the envoy said, "these issues are taken very seriously by the Swedish govt as well as the Indian govt, am sure relevant authorities will look at this". Swedish news channel SVT reported on Tuesday that Swedish truck maker Scania had allegedly paid bribes to win contracts in India.

Sidhant Sibal: How was the India Sweden virtual summit? The key outcomes?

Klas Molin: The virtual summit is the latest of five interactions between our Prime Ministers in recent years. They had a good working relationship, during the Covid times. This is the mode they have to follow, which is virtual. It was a good opportunity to run through what is a very active partnership. They have a joint action plan together and also an innovation partnership. This summit really gave a wonderful opportunity to run through the priorities, which remain the same. We have very strong cooperation in trade and investment, various kinds of research on health, a number of key issues like climate change is another area that they discussed. Sweden has decided to join the International Solar Alliance. Our Prime Ministers are partners in lead IT group, which is a leadership group on Industrial transition, which is looking at new production methods down line in industries that have been key emitters. These are some examples.

Sidhant Sibal: How are both countries cooperating to deal with Covid crisis, particularly the vaccines?

Klas Molin: We had interaction with our health ministers over the year and we had a number of other interactions of experts from both sides. We have a health MoU, in effect over a decade. Our minister for health and social affairs was here two years ago with a big delegation. Under the MoU, one of the keys that was discussed and highlighted last Friday was a health hub that has been created at AIIMS, in Jodhpur, Rajasthan. This is the latest manifestation of cooperation. Of course, Covid is an obvious discussion point at this time and I believe and it's fair to say, Sweden is congratulating India for the work it is doing in so many areas including being the pharmacy to the world in producing vaccines. It's true, AstraZeneca is here in a big way, cooperating with the Serum Institute in Pune. We are watching both the production and rollout of vaccines for vaccination in India, also internationally efforts under Covax, and also bilaterally, what India is doing to help its neighbours. Ghana was the first country that received Indian vaccines under the Covax. So very impressive and this was recognised.

Sidhant Sibal: How has the progress been on the innovation dialogue that was announced in 2018?

Klas Molin: We have an innovation partnership, it's part of the joint action plan, but it's also a standalone partnership. So we have excellent cooperation between our research foundations, our funding agencies. The PM of Sweden is personally very engaged in innovation. He chairs the national innovation council himself. When the state visit took place in late 2019 here in India, the King and Queen came, we also had the first innovation dialogue. The PM and King of Sweden jointly inaugurated the first dialogue. It is a way to learn from each other and also have our agencies, ministries but not least both the private sector, research and academia involved in innovation. It is a collective effort for everything that is going on and is an innovation partnership for a sustainable future. It needs to be sustainable in terms of climate and also in job creation, which is always an important factor for India, Sweden and globally.

Sidhant Sibal: Was Myanmar discussed during the virtual summit?

Klas Molin: The Prime ministers expressed concerns, definite and strong concerns over recent developments in last month as the new Parliament was about to take their seats, the govt was overtaken by military authorities. It is particularly troubling, given the last 10 years of democratic change, the opportunities, the free elections for 2015, the elections in Nov 2020, that had given an increasing clear majority for a party and civilian rule. The leaders acknowledged how serious they view it and how important is for the international community to step in and denounce the development.

Sidhant Sibal: Any update on the India Nordic summit?

Klas Molin: The first summit happened in Stockholm, back-to-back with PM Modi's visit in April and we were very happy and honored to host that. I think it is a very useful way of combining, I mean the Nordic countries have a long history of cooperation, we are neighbours, cousins and similar, both when it comes to many of the policy issues. Also, the focus of our economies, being sustainable, being green and very heavily into information and technology. If I may speak for India, it is very clearly a useful way of meeting several leaders who happen to be similar in focus. We of course are independent countries, some of us members of the EU, some are outside, but in one stop you get chance to meet five heads of government and you can set out ways of cooperation which are similar to bilateral aims, but also have multiplying effects. When it comes to population, fairly humble, but economic output and interest in cooperating with India is huge and benefit for us and for India is definitely there, and that is why PM and Indian government see it in interest to approach us in the group, combined with bilateral relations.

Sidhant Sibal: Reports have emerged in Swedish media on a Swedish company being allegedly involved in paying bribes in India. Any reaction?

Klas Molin: I haven't seen it, I have seen the headlines. I think it's a news story, if there is anything to allegations that are being made, sure relevant authorities will be looking into this. But naturally, these issues are taken very seriously by the Swedish govt as well as the Indian govt, am sure relevant authorities will look at this and we will see what they have to say if there is anything to say.