Exclusive: 'Situation is strenuous but not critical,' Ukrainian ambassador to India tells WION 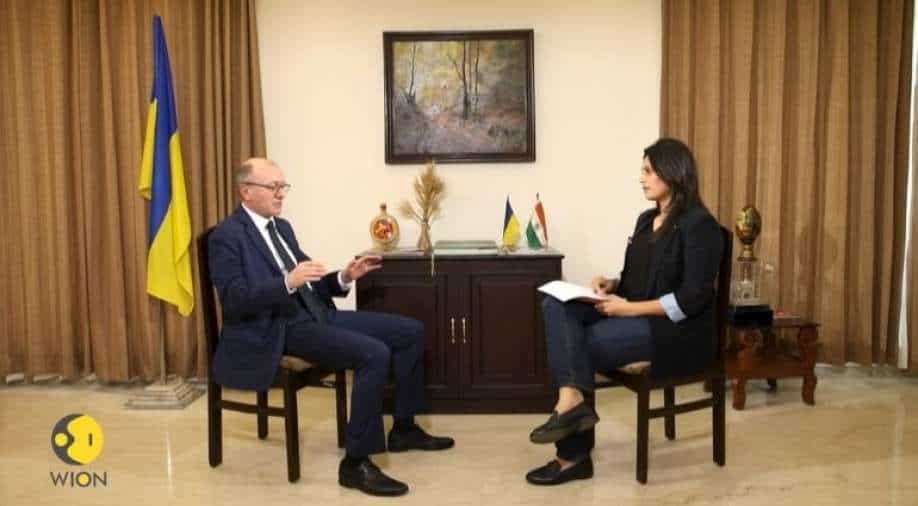 Lauding WION's professionalism in its direct coverage of the conflict from Kyiv, Polikha slammed a section of media for sensationalising the tensions between Russia and Ukraine

In an exclusive conversation with WION's Executive Editor Palki Sharma, Ukrainian Ambassador to India Igor Polikha has said that the ''situation (in Kyiv) is strenuous but not critical.''

Although Western media houses had claimed that ''war is emminent'' and Russia will invade Ukraine on February 16, Polikha said, ''Our president never confirmed any date for invasion.''

Lauding WION's professionalism in its direct coverage of the conflict from Kyiv, Polikha slammed a section of media for sensationalising the tensions between Russia and Ukraine. He also appreciated the balanced approach adopted by the Indian government.

Ukraine staged military drills and defiant displays of flag-waving patriotism on Wednesday as Western powers warned Russia is continuing to mass forces for a possible invasion.

The demonstration of Ukrainian firepower contrasted with images on Russian state media that were said to show Moscow's forces bringing an end to a major exercise in occupied Crimea.

On Tuesday, Ukraine said the websites of the country's defence ministry and armed forces, as well as two banks, had been hit by a cyberattack of the kind that US intelligence fears would precede a Russian attack.

"It cannot be excluded that the aggressor is resorting to dirty tricks," Ukraine's communications watchdog said, in reference to Russia.

The United States and NATO have said Russia was still building up troops around Ukraine on Wednesday despite Moscow's insistence it was pulling back, questioning President Vladimir Putin's stated desire to negotiate a solution to the crisis.

Russia says it never planned to attack Ukraine but wants to lay down "red lines" to prevent its neighbour from joining NATO, which it sees as a threat to its own security.

The Kremlin said Putin was keen to negotiate with the United States, which has offered discussions on arms control and confidence-building measures while ruling out a veto on future NATO membership for Ukraine.

But Russia also said it would be ready to re-route energy exports to other markets if it was hit by sanctions, which Washington and its allies have threatened if it invades Ukraine.

Finance Minister Anton Siluanov said sanctions against Russian banks would be "unpleasant" but the state would ensure all deposits with banks and transactions were secured.

"They say we have a financial shield in the form of gold and forex reserves, budget surplus ... low debt," he told reporters.

Russia's huge build-up of troops, missiles and warships around Ukraine, which US intelligence warns could turn quickly into an invasion, is being billed as Europe's worst security crisis since the Cold War.

Russian President Vladimir Putin has demanded Ukraine be forbidden from pursuing its ambition to join NATO and wants to redraw the security map of eastern Europe, rolling back Western influence.