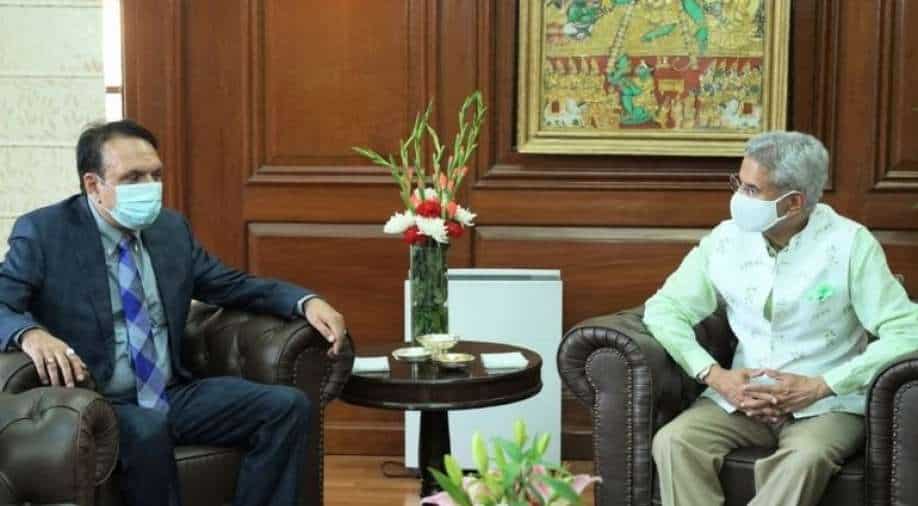 Under the previous KP Oli led govt, New Delhi-Kathmandu ties had plummeted in the backdrop of the new Nepal map row

Speaking to WION’s diplomatic correspondent Sidhant Sibal exclusively in Delhi, Mahat who is the Joint General Secretary of Nepali congress said, "we need to have very frank and straight discussions, communication and that will only help in having better relations between the two countries".

During his meeting with EAM Jaishankar, he raised the issue of border rows, deliveries of Covishield vaccines and a Nepalese national falling into Mahakali river. He said," If India comes out with a positive gesture, that will give a very positive message in Nepal".

Nepal congress delegation visit to Delhi comes, even as there is a new government in Nepal under the leadership of PM Sher Bahadur Deuba. Under the previous KP Oli led govt, New Delhi-Kathmandu ties had plummeted in the backdrop of the new Nepal map row.

WION: How were the conversations in Delhi, with the ruling party BJP and EAM Dr S Jaishankar?

Prakash Sharan Mahat: We had a discussion with party leader JP Nadda, a very good meeting. We want to have exchanges between the two parties so that there is more understanding, and we understand each other and we also understand how both parties function. We learn from good practices of both parties, that is the aim.

We aim to further these corporations and exchanges of these visits. The meeting went very well, and we had fruitful discussions.

At the government level, we met EAM Jaishankar and we had very good meetings. I raised issues important for Nepal, from border issues, the Covishield issue that needs to be delivered to Nepal, to fertilizer deliveries, and one case of falling of one person of Nepal who fell into river Mahakali.

There was a question of the role of BSF personnel, and many issues important to Nepal. We suggested giving importance to these issues, as they may look like small issues, but that will have a huge impact on Nepali people's sentiment. If India comes out with a positive gesture, that will give a very positive message in Nepal and help build our relationship at a higher level, and that is what we discussed and I found discussion with him had a very positive mindset and he reiterated that they support whatever government in Nepal, always support democratic practices and we want to see that Nepal move forward.

WION: How do you see India-Nepal relations going forward. The new Nepal map row had irked Delhi a lot...

Prakash Sharan Mahat: On the Nepal map, we have a common position that is based on historical facts. We believe that we have legitimate claims. We have to resolve it through diplomatic dialogue. That is the only way, I suggested that if we start talking about this sooner and later, we will find a resolution. It may not happen over time, but for sure once we start talking...that was my suggestion. He took it very positively.

Similarly, on the Covishield issue, he said they will deliver it soon. There were other issues, he said positively, and he wanted to have a very strong relationship between the two governments, two nations.

We are contributing to India a lot in terms of securing borders, at the same time India is also helping. But we need to have very frank and straight discussions, communication and that will only help in having better relations between two countries. We have so many things in common between the two countries. Open borders, people coming here and there, we have similar cultural aspirations and values. We have pilgrimage centres in Nepal, India, where both people visit each other's places.

I think we are bound to be together so that there is no scope of distancing ourselves. Even when we have some problem, so the only way to resolve is to talk, so we cannot keep away from talking. During the previous government, (due to) zig-zag approach to foreign relations, there is distrust.

WION: And You will be going to Lucknow?

Prakash Sharan Mahat: We are going to Lucknow tomorrow and meeting with CM Yoginath. UP has a long border with Nepal, so we will discuss how the largest state in India and Nepal work together. We have people coming in, going. At the local level, we have good relationships that will facilitate people from both sides.

WION: Increased Chinese influence in Kathmandu has been a worry. Delhi is worried about it. How do you see ties with Delhi and Beijing?

Each country will focus on their interests, so Nepal should not be an exception.

Nepali Congress is very clear about, and will not be influenced by what kind of govt there is. This is a nation-to-nation relationship and has nothing to do with the political system there. We are a democratic country and we run our country in a democratic way. Will make sure our interest is protected and will not let any country encroach on something which is detrimental to the security of another country.