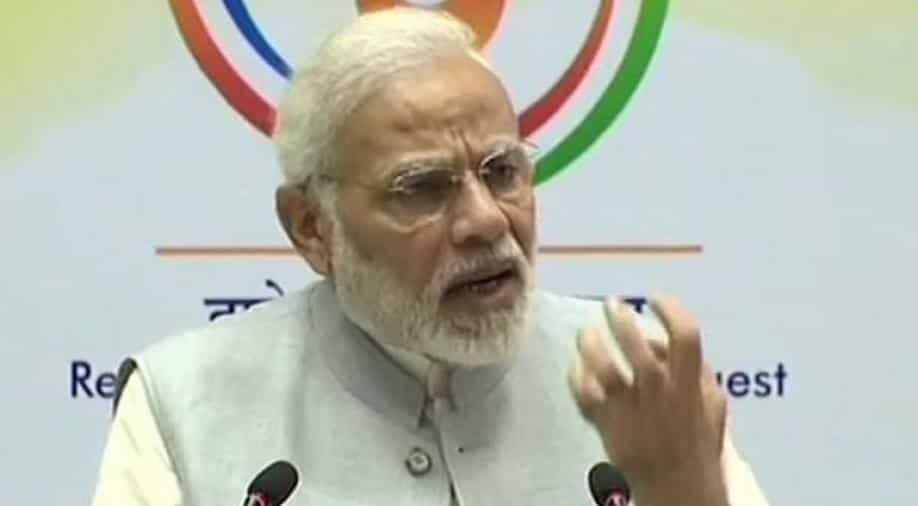 'What happened in Pulwama and Uri was heartbreaking... We cannot bear this pain till eternity. Enough is enough,' the prime minister said Sunday.

Prime Minister Narendra Modi Sunday sent across a strong message to terrorist forces targeting India, saying the country cannot keep suffering forever and that his government has taken some "strong decisions" against such elements.

"For many decades, the country and numerous families have suffered the wounds and pain given by terrorism, Naxalism and insurgency. What happened in Pulwama and Uri was heartbreaking.

"We cannot bear this pain till eternity. Enough is enough," the Prime Minister said while addressing CISF personnel at its base here.

The paramilitary force on Sunday is celebrating the 50th year of its raising.

This is the first time Modi attended the event of any of the five Central Armed Police Forces (CAPF) since he took charge in 2014. Raised in 1969, the Central Industrial Security Force has about 1.56 lakh personnel in its ranks at present.?

The PM said that following dastardly acts of terrorist violence, his government has taken some strong decisions, in an apparent reference to the IAF strike on terror camps after the Pulwama attack.?

"Someone, sometime, has to take a big decision (against such terror acts)... It is my privilege that with the support of the crores of people of this country, we took some strong decisions," Modi said with the top security officers in attendance.?

He said the government has adopted "a new policy" to act against terrorism and that it was its responsibility to live up to the expectations of the families of the personnel killed in the line of duty.?
"Our government is purchasing all modern gadgets required by our security forces to tackle such challenges," Modi said, mentioning the creation of a new facility in UP's Amethi to manufacture modern guns.?

The PM lauded the valour and dedication of CISF men and women who protect "vital assets" of the country in the face of a "hostile neighbour which does not have the capacity to fight a war."?

"Various conspiracies hatched within the country are getting encouragement from across the border and ghastly picture of terror comes to light, in different forms," Modi said, keeping his apparent reference on Pakistan.

Modi also hit out at the abuse of "VIP culture", saying it was wrong on part of such people to throw their weight around, get angry and humiliate security personnel, a major brunt of which is faced by the CISF.

"I'd say the biggest problem while carrying out your duty is people like me, VIPs.. The VIP culture at times is the biggest threat to security," he said.

"When you frisk, some people get annoyed and even say 'I will see you' and you have to tell them that it is your duty which has to be done," the PM added.

Therefore, he continued, "I would dare tell such people to be disciplined and cooperate with the security personnel in carrying out their task."?

The CISF gets a number of complaints from legislators and others categories of VIPs alleging high-handedness by their staff at various airports.?

"I am myself, Modi said, "very disciplined and I would urge the CISF to train and inform citizens about their security systems so that the appreciate the hard work put in the job by the people in uniform.

"Position does not come in the way of disciple for me. And it is the duty of every citizen to be disciplined. If citizens don't maintain discipline, your task gets complicated," he said.

He asked the people to consider security frisking a process to ensure their wellbeing and a method of 'aarti utaarna' (a respectful way to welcome people) by security personnel.?

"We should feel proud that the security personnel are doing it (frisking) like aarti," he said.
Aarti is a Hindu ceremony in which lights with wicks soaked in ghee are offered to a person to ensure their wellbeing and thwart the evil eye.

The PM said it was his "emotional feeling" that security personnel donning the 'khaki' have not got the recognition and respect they deserve.

The national police memorial and the war memorial had to wait to come up since independence, he said, adding "probably my turn was being awaited" for the last 70 years to unveil these important places.

The PM asked the CISF to create a to "monitor and study in realtime global trends and techniques of terrorism" so that a better preparedness is ensured against. He also directed the force to install 'digital museums' or electronic walls at airports so that people get to know about CISF's history, role and its expectations from the citizens.? Congratulating the CISF, the PM said it's very difficult to protect any institution where there is a daily footfall of 30 lakh (Delhi Metro) or where eight lakh people commute every day (airports).

"You are not only standing at the gate, you are contributing to the country's growth," Modi told the CISF personnel.

Modi also said among the 35,000 policemen who sacrificed their lives serving the nation since independence, 4,000 are from paramilitary forces.

On February 14, a convoy carrying CRPF men was attacked by a JeM terrorist in the Pulwama, killing 40 jawans. Following the attack, India destroyed JeM terrorists camp in air strike inside Pakistan.

On September 18, 2016, heavily armed terrorists stormed an army base in Uri in Kashmir killing 17 jawans, prompting India to conduct surgical strikes on terror launch-pads across the LoC.