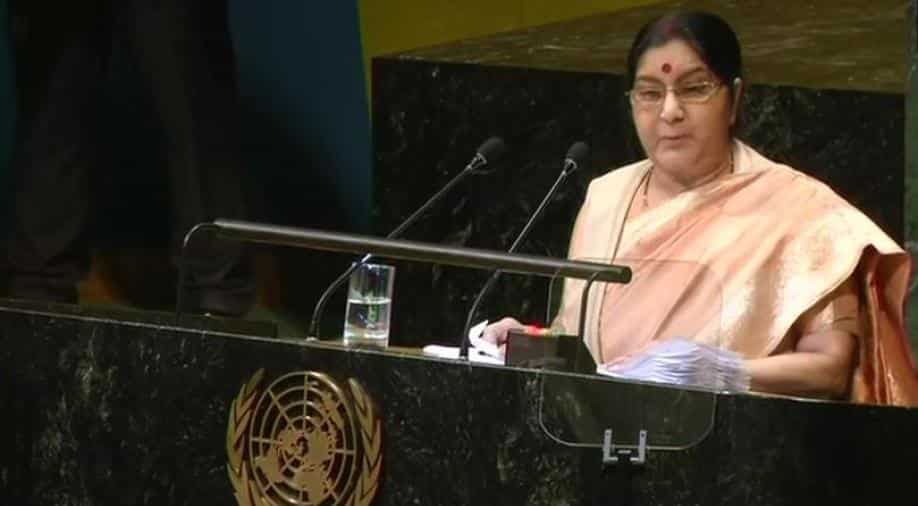 In her calls, she briefed how about the Indian strikes were non-military preemptive action against the terror group that has been responsible for many attacks in India.

In her calls, she briefed how about the Indian strikes were non-military preemptive action against the terror group that has been responsible for many attacks in India.

Earlier in the day, India briefed foreign envoys in the countries regarding its action. The foreign secretary Vijay Gokhale briefed envoys of the P5 or the permanent five countries of the United Nations security council which include--China, Russia, US, France and UK, ASEAN bloc, Brazil, Australia, Brazil, Germany, Kuwait and neighbouring countries like Bhutan, Maldives, Afghanistan, Sri Lanka.

A source told WION that during the briefing, Foreign secretary asked "international community to impress upon Pakistan the need for it to take action to seriously fight terrorism" and the aim of India preemptive action.

Later Dean of Diplomatic Corps Hans Dannenberg Castellanos speaking to reporters outside the MEA said,"The message was exactly the one conveyed to media, the operation was a very directed one and did not impact any civilians in Pakistan and did not impact any military installations in Pakistan.. and it was a pre-emptive strike to avoid any terrorist attacks in India, they had credible intelligence that the people who were planning it was in that camp. It was a responsible action We have to inform our capital"

Meanwhile, reactions have started to come. Australia was the first country to react. While expressing concern, Australian foreign minister in a release said, "Pakistan must take urgent and meaningful action against terrorist groups in its territory, including Jaish-e-Mohammed"

Australia urged that Islamabad "must do everything possible to implement its own prescription of Jaish-e-Mohammed" and can "no longer allow extremist groups the legal and physical space to operate from its territory."

The United Kingdom also said its "concerned by rising tensions". While asking both India and Pakistan to avoid taking action that poses risk to regional stability, London said its working closely with international partners, including in the "United Nations Security Council (UNSC), to ensure that those responsible for the Pulwama attack are held to account.”

Wion has learnt that UK is working on the listing of Jaish-e-Mohammed leader Masood Azhar under UN Security Council Resolution 1267 and has had discussions with members of UNSC on this issue.

France last week said it will propose listing of JEM chief Azhar for his listing as an international terrorist, something that has been scuttled by China many times in the past citing lack of consensus at the 1267 committee of UNSC.

Pakistan all weather ally China has taken a cautious stance. Asked about the Indian strikes, Chinese Foreign Ministry spokesman Lu Kang called both India and Pakistan to "exercise restraint" and do more to "improve their bilateral relations"

Indian external affairs minister will be in China on Wednesday for the RIC or Russia, India, China foreign ministers meet in which she will be strongly raising with Bejing listing of Masood Azhar as an international terrorist under UN list.

Meanwhile, in a copy move, Pakistani foreign minister SM Qureshi has been briefing diplomatic corp in Islamabad post-Indian strikes in Pakistan. He spoke to US secretary of state Mike Pompeo.

In the aftermath of Pulwama, he has been calling his global counterparts saying Islamabad is willing to act if given actionable evidence of its involvement in Pulwama terror attack, only to be told Pakistan must act on terror groups on its soil.

Monday releases from European Union (EU) and Germany foreign offices both have called on Pakistan not to allow its territory as a safe haven for terror groups with EU High Representative for Foreign Affairs and Security Policy Federica Mogherini saying Islamabad needs to act on terrorism in a  clear and sustained actions manner.

Pakistan also summoned Indian Acting High Commissioner to lodge a protest on Indians strikes and accepted that Indian aircraft were present in its air space in wee hours of Tuesday morning.