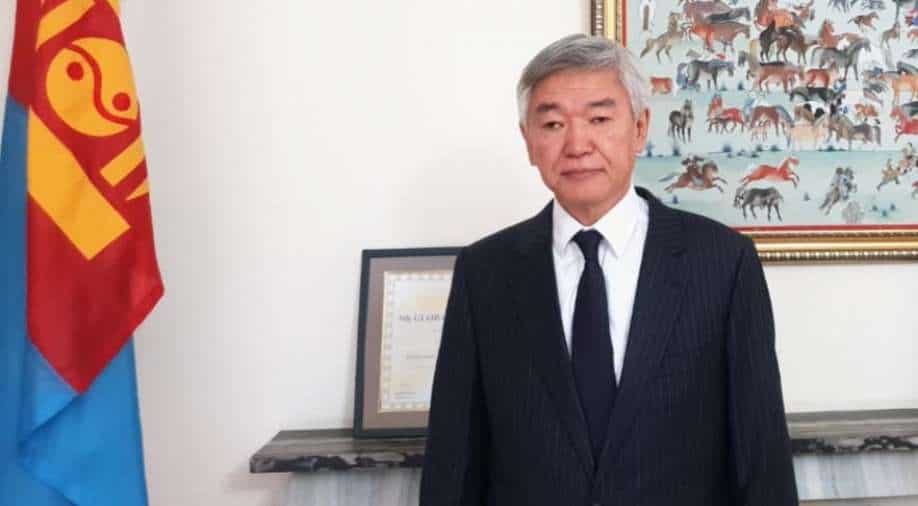 Speaking to our Principal Diplomatic Correspondent Sidhant Sibal, Ganbold said, "India is known in Mongolia as Bharat and the land of Lord Buddha. Each and every Mongolian has a very high regard for India."

The Mongolian Ambassador to India Gonching Ganbold has said that his countries ties to India are based on 3 Ds--Dharma, Democracy and Development and as both countries celebrate the 65th anniversary of diplomatic ties this month, the "relationship has grown in forms and content".

Speaking to our Principal Diplomatic Correspondent Sidhant Sibal, Ganbold said, "India is known in Mongolia as Bharat and the land of Lord Buddha. Each and every Mongolian has very high regard for India."

As part of diplomatic year celebrations, both countries earlier this month released a joint commemorative stamp. Last year, PM Modi and the Mongolian President virtually inaugurated the statue of Buddha which Ambassador Ganbold said, is "a spiritual investment and revival of our national identity.”. Ambassador Ganbold knows Hindi well.

India is helping build an oil refinery in the country, which will help Mongolia save foreign exchange and also have far-reaching economic benefits. In fact, India is training 22 Mongolian engineers at the Indian Institute of mines who will work at the refinery.

WION: This year marks the 65th anniversary of ties, so what is being planned.

Yes, you have pointed outright, our relations are marking 65th anniversary this month of the official establishment which is based on aged long bonds, historical, spiritual, cultural links that bind our 2 nations. Ever since the teaching of Lord Buddha had prevailed in the Steppes of Mongolia, we became to learn of India. India is known in Mongolia as Bharat and the land of Lord Buddha. Each and every Mongolian has a very high regard for India. Based on the spiritual ties, our cultural-historic links have grown up. You know, a lot of places in Delhi, those have names which are thought-provoking--Mongolpuri, Mongolbad. That could give me the idea that our relationship had to be deep routed and then we have a lot of cultural links. Last July, the President of India, had released the sutras of Mongol Kanjur, which are collections of Lord Buddha's teaching. PM Modi visited Mongolia in 2015, and then he also gave a sampling of Lord Buddha Banyan tree which was greatly appreciated by Mongolian Buddhists. This shows how close we are, spiritually, culturally. This year we mark our 65th anniversary, our links and ties are bond for years, centuries. Our diplomatic relation is based on aged long ancient traditional relations.

WION: What kind of current engagement is on, we saw PM visiting, defence minister's visit as well.

Gonching Ganbold: I would link to define the relations in "D"s--Dharma, democracy, development. Dharma, we mentioned. It aged long ties, which we have common links, democracy is our common values. Like India, is the largest democracy, we also a democracy in Asia. We adopted our new democratic constitution in which Indian Parliamentarian have given us support, and worked together with us in drafting in 1992. Then we working in the field of development. This is also unleashing, new areas, and brought our relationship to new heights. Our relationship is very vast, and it is wide in range, comprising a lot of areas. Though this time of the pandemic, the relationship has grown in forms and content. Dr Jaishankar met with our cabinet minister, earlier this year, and then they chalked out together what they will do this year on 65th anniversary. We recently, 2 weeks back had inter govt commission meeting that summed up, what we have done in the last year or so, and what we have planned in the coming months and years.

WION: The Oil refinery is a key infrastructure project India is engaging on if you can give a status.

Gonching Ganbold: One part of our relationship is developing. Oil refinery is one of the big projects between our 2 governments. Mongolia exports crude oil, imports petroleum products which we spent a lot of foreign exchange. The refinery will help save foreign exchange and build up indigenous production of oil, new jobs and I believe will create a new wave of industrialization in Mongolia. Govt of India and Mongolia had done a large number of surveys, where the soft loan will be utilized efficient way, then we came to a conclusion on oil refinery. We have announced the tenders and project also started and engineers India ltd became a leading player in the project and then sub-contractors were selected. Construction work going on in full swing, Mongolian govt also built up railways, 27KM, and high power electricity grid, 22KM and housing construction for 550 employees- workers, not only physical infrastructure. We have started training our engineers in India. This year we had 22 engineers from Mongolia to India, who will work in the refinery and underwent training in the Indian Institute of mines. So, the project is moving ahead on all fronts--physical, intellectual. I find this project will become leverage in expanding our economic exchange.

WION: Both countries are focusing on cultural engagement as well.

Gonching Ganbold: Last year we inaugurated the huge statue of Lord Buddha and his 2 disciples from here in Delhi. PM Modi, together with my President inaugurated virtually, that statute inauguration became indeed a spiritual investment and revival of our national identity. Through Buddhism, we reviving our identity. Then we also had a conference bilaterally in which 11 Asian Buddhist countries also took part and that is samwad--Dialogue. At this time of terrorism, radicalism, compassionate teaching of Lord Buddha is becoming important. So both of our countries share common spiritual links, it will become another area in which we can work together, and prevailing of soft power. The teaching of Lord Buddha have been complied in sutras, Kanjur and has been printed in various places, including India. President of India also presented new publications of Kanjurs sutras to Mongolian people on 4th July and that event is an indication of the importance govt of India attaches to its relations to Mongolia. I as an envoy of Mongolia appreciate this, its big respect and attachment.

WION: Amidst the Covid crisis, how both countries are working together?

Gonching Ganbold: Covid related situation creating new normal, and it also not only causing challenge but also created an opportunity. 2 weeks back we had our joint commission meeting in which our ministers also discussed in details where and how we can work effectively for the instance pharma industry in India is highly developed and products good quality and cost-effective. In this field we can work, Bharat biotech doing remarkable work. Govt of India has indicated that it will support Mongolia in this regard. Mongolia is unfortunately not left aloof from the challenge. We have witnessed the first local transmission, so far we have some 810 cases, out of which 450 are imported, and the situation not very easy and we also working with our friends to obtain this vaccine and other pharmaceuticals. Discussions going on with India and we find it very helpful. This situation created new opportunities, though it is physically impossible to exchange visits and talks, we spoke virtually. 2 weeks back we had a joint commission meeting and previously our 2 foreign ministers also had telephonic exchanges and covered a lot of issues of our bilateral relations. In the past, we worked to arrange special flights. So far we have arranged 4 special flights, some students from here left for Mongolia and engineers from Indian companies went to Mongolia to construct the project. Last we arranged special consignments of IT equipment so that they can be used to set up cyber centres. So these trying times created problems, but at the same time, they also created promising opportunities. The cyber outsourcing and training centres will be established in Mongolia so that Mongolian youth can be trained. Physical distance has become shrunk. A few years back, I used to say India is far due to geography, but closer to our hearts but now it is not only closer to hearts but becoming very easier to communicate. In the ancient past, people used to travel on horseback, foot, but thanks to IT advancement it is becoming handy to communicate.