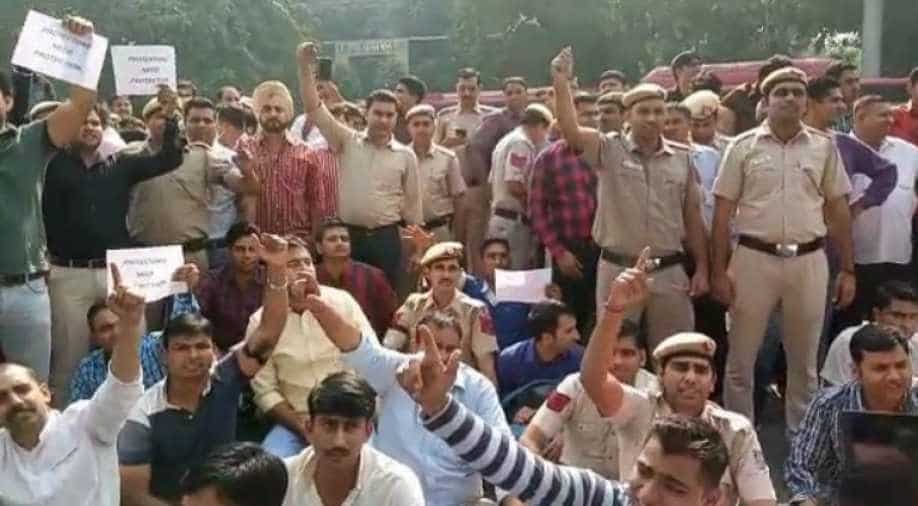 The family members of cops sloganeered and held placards claiming ''who will protect the protectors of law", "why courts turned blind", etc at India Gate in New Delhi.

Hundreds of people from police alongside their family members protested in Delhi on Tuesday over multiple incidents of violent clashes between cops and lawyers a few days ago.

Hundreds of police personnel gathered outside Police Head Quarters (PHQ) and carried their demonstrations.  The family members of cops sloganeered and held placards claiming ''who will protect the protectors of law", "why courts turned blind", etc at India Gate in New Delhi.

Delhi: Family members of Delhi police personnel hold protest at India Gate against the clash that broke out between police & lawyers at Tis Hazari Court on 2nd November. pic.twitter.com/bJA4Z42bi2

Satish Golcha, Special Commissioner of Police Delhi gave assurance to the protesters that all the injured policemen in the Tis Hazari clash will be given at least a compensation of Rs 25 thousand by Delhi Police.

The tussle between lawyers and Delhi cops has been ongoing from the weekend where both parties have been injured due to the violent struggle. On November 2, clashes broke out between barristers and police personnel for claiming a parking spot outside the Tis Hazari court.

The lawyers set a police van on fire, while the other party ransacked the lawyers' chamber. At least 30 people were injured in the clash where shots were also fired.

Later, a video surfaced where a robe-clad advocate was found punching and slapping a cop who was trying to flee on a motorcycle. This video triggered Tuesday's protests.

So, far six FIRs have been lodged.

"We want justice. We also have human rights, the guilty lawyers must be punished severely," said one of the protesting cops to AFP.

Lawyers also protested and some even threatened to go to an indefinite strike if their demands are not met.

The Central Indian Police Service (IPS) Association and police unions of various states such as Bihar, Tamil Nadu expressed solidarity with the cops over the Tis Hazari clash and demanded a fair investigation of the incident.