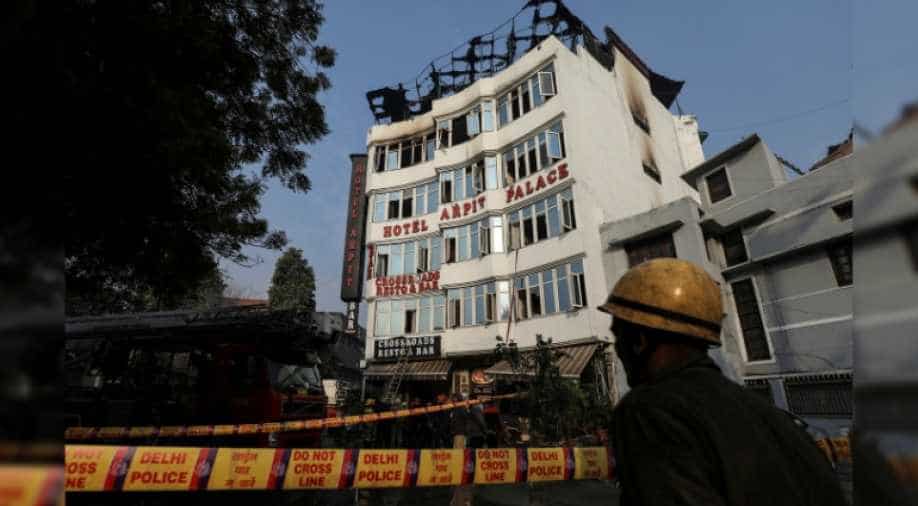 The hotel was allegedly flouting other norms too, including running a makeshift restaurant on the rooftop.

Union minister KJ Alphons has said the emergency exit of the Arpit Palace Hotel, which caught fire early Tuesday morning, leading to the deaths of at least 17 people, was locked.

Alphons, who is minister of state (with independent charge) for tourism, visited the accident site on Tuesday.

“When I headed to the emergency exit, I found that it had been locked yesterday (last night). Also, it was too narrow,” he told reporters there.

“Obviously, even if people came to the emergency exit, they could not have escaped as it was too narrow and it was locked anyway,” he added.

The hotel was allegedly flouting other norms too, including running a makeshift restaurant on the rooftop.

Delhi Chief Minister Arvind Kejriwal has ordered a magisterial enquiry into the fire.

Officials said the report of the probe is expected to come in three days.

"A probe has been ordered and its report is expected in three days. The probe will seek to find if there were any lapses from the civic officials' end, or Delhi Fire department's end and also talk about ensuring that such incidents do not recur," North Delhi Mayor Adesh Gupta said.

Action will be taken against civic employees if they are found guilty of committing any lapses, he said.

As per the preliminary NDMC report, the fire initially broke out on the second floor of the building.

"As per preliminary information gathered from the site, it reveals that the incidence of fire occurred on the second floor around 3.30 am today due to short-circuit," a senior official said.

The hotel was first granted a licence in October 2005 and was renewed every year. The last licence renewal was done on May 25, 2018, which is valid till March 31, the official said.

"However, no unauthorised construction has been reported in the recent past. The entire structure is under protection within the provisions of Delhi Laws (Special Provisions) Act," the official said.

The National Capital Territory of Delhi Laws (Special Provisions) Second (Amendment) Bill gives immunity to slums and some unauthorised constructions until December 31, 2020. The immunity under the existing Bill ends on December 31.