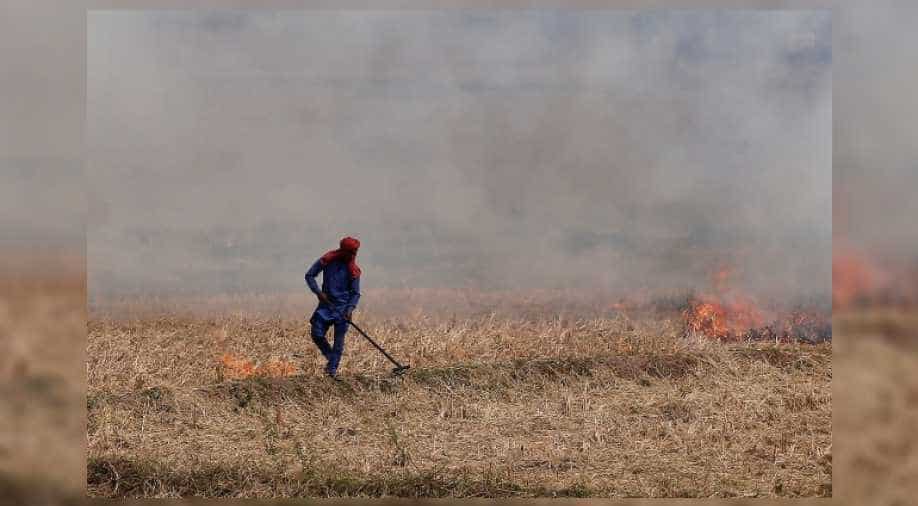 A farmer burns the stubble in a rice field in Zirakpur in Punjab. Photograph:( Reuters )

Harpal Singh struck a match and watched his fields burn, the acrid smoke drifting toward New Delhi where a lethal smog cocktail is once again intensifying over the world's most polluted megacity.

Every November, air pollution in north India reaches levels unimaginable in most parts of the world, forcing schools shut and filling hospital wards with wheezing patients.

The scourge is compounded as farmers like Singh -- rushing to ready their fields for next season's wheat crop -- use fire to quickly and cheaply clear their land.

He knows slash-and-burn farming is illegal and that doing so, year after year, helps sicken millions in Delhi and beyond.

But local authorities appear powerless to stop it and -- looming health crisis or not in Delhi -- the narrow window to plant for the winter harvest is closing.

"We have no other choice but to burn the straw," Singh told AFP in Ishargarh, a village in Haryana, about 120 km northwest of Delhi.

"We know the smoke pollutes the air. But it is the cheapest and easiest way to get rid of the (crop) residue," the 65-year-old farmer told AFP, as burning straw crackled and popped behind him.

This smoke is already reaching Delhi, bringing a familiar sepia haze and a bad omen for officials wanting to avoid a third straight year of record-setting smog.

Deterrents, such as fines of up to $200 for farmers flouting the law, appear to have limited effect.

S Narayanan, from Haryana's State Pollution Control Board, said Rs. 3 lakh in fines had been issued and fires were down 40 percent in some areas.

"But our intention is not only to take punitive action, but to educate the farmers," he told AFP.

Farmers represent powerful voting blocs in rural states like Haryana and Punjab, and local authorities are reluctant to upset them.

Efforts to persuade farmers, many living below the poverty line, to adopt alternative methods of land clearance have fallen on deaf ears.

Many have balked at suggestions of buying "Happy Seeders" -- expensive machines which according to media reports cost at least Rs. 1.5 lakh - that sow wheat without needing to dispose of the leftover straw.

The government is offering a subsidy of 50 percent to individuals and 80 percent to groups of farmers to encourage them to use the machines.

"We are already in debt... and we can't afford even the subsidised machines," said Karnail Singh, a 60-year-old farmer. He suggested the government pay farmers by the acre not to burn their fields.

Television ads, social media campaigns and meetings at the village level have also had limited success.

Powerful farmers unions say many of the government's ideas -- such as encouraging farmers to sell straw to factories -- overlook extra costs imposed on poor rural families.

"Who will bear the cost of transporting the straw? Farmers are also concerned about the pollution, but they are helpless," said Sucha Singh from Bhartiya Kisan Union, a farmers' rights group.

Many farmers feel scapegoated for the modern-day problems of the country's fast-growing cities.

The WHO in May listed 14 Indian cities in the world's top 15 with the dirtiest air, with Delhi dubbed the most polluted major centre.

"Farmers are blamed for the pollution, but nobody talks about the factories and cars and buses which are the main culprits," Singh said.

Others are more defiant.

"We are always the soft targets. We will continue to burn stubble. Let the government do what it can," said another farmer Harbans Singh.

With smoke on the horizon, the Delhi government is squaring off for a fight with its neighbours.

It recently closed its last coal-fired power plant but Chief Minister Arvind Kejriwal warned of another smog crisis if Punjab and Haryana failed to take "concrete steps" on crop fires.

"The entire region including Delhi will again become (a) gas chamber," he said on October 12.

"People will again face difficulty in breathing. This is criminal."