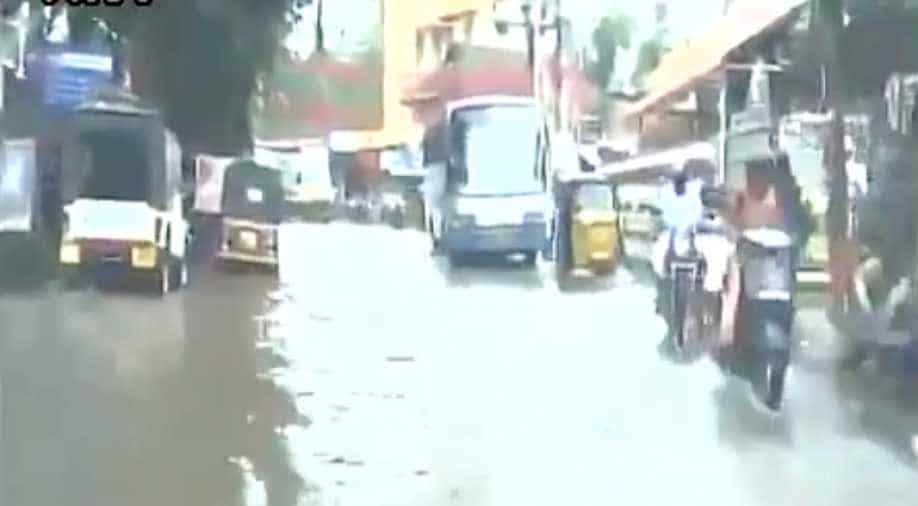 The Indian Navy and the National Disaster Response Force (NDRF) were today deployed for rescue operations as Cyclone Ockhi intensified into a severe cyclonic storm and wreaked havoc in the states of Tamil Nadu and Kerala today and on Thursday.

The cyclone has so far claimed the lives of eight people, four each in Kerala and Tamil Nadu.

The navy is currently rescuing people stranded at sea. It has rescued eight fishermen so far, PTI reported.

A Defence spokesperson told PTI  that 13 boats with 38 crew from Kerala and one boat from Tamil Nadu with four persons onbard were missing.

"The fishermen were found floating in the water by Advance Light Helicopter," the spokesperson said.

Home Minister Rajnath Singh spoke to the Director General of the NDRF and reviewed the situation in the affected areas.

More NDRF teams are on standby to respond to any further emergencies.

The India Meteorological Department (IMD) has issued an alert of heavy to very heavy rainfall in both the states during the next 24 hours.

"CGS Samarth sailed from Kochi for rescue. All the seven units are directed to work for rescue along and off Kerala coast. In addition, the Eastern Naval Command will launch P8i Maritime Patrol aircraft," the defence minister said, adding on Twitter that six warships and two coast guard ships have been deployed along with additional air effort.

For Search & Rescue (SAR) off Kanyakumari @IndiaCoastGuard deploying 2 OPVs in the area, and 1 OPV is being deployed ex Toothukudi. Additional Dornier sorties will be taken up from dawn. @indiannavy @DefenceMinIndia @ShashiTharoor #CycloneOckhi

At least 80 fishermen and 50 boats have gone missing, ANI reported earlier this morning. The navy said it had launched rescue operations to rescue them.

The cities of Kanyakumari, Tuticorin and Tirunelveli districts in Tamil Nadu received rainfall for the third day.

The cyclone, which was 70 km south of Kanyakumari in the Bay of Bengal yesterday is now moving towards the Lakshwadeep Islands in the Arabian Sea.

"Ockhi cyclone intensified into severe cyclone and lies at about 110 km northeast of Minicoy (island) and it is likely to cross Lakshadweep arch during the next 24 hours," the India Meteorological Department said in a bulletin this morning.

Gale winds at a speed of 110-120 kmph and gusting to 130 kmph were very likely over and around Lakshadweep during the next 24 hours.

Squally wind conditions would prevail along and off Kerala and Karnataka coast.

The met department has forecast rainfall isolated extremely heavy rainfall (more than 20 cm) over Lakshadweep area during next 24 hours.

The deadly storm has killed seven people in neighbouring Sri Lanka and affected the lives of nearly 20,000 people.

(With inputs from ANI, PTI)