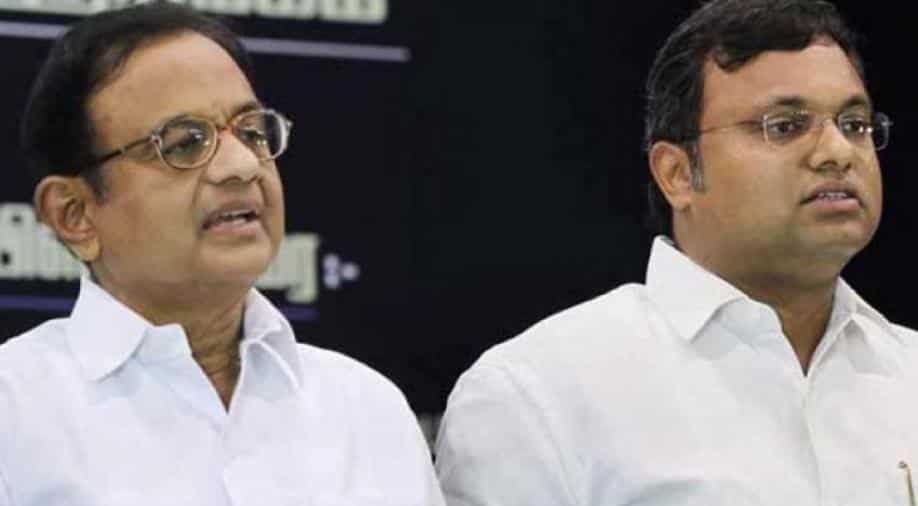 The court pulled up the agency for filing the charge sheet without proper sanction and told the CBI that if required documents are not filed by November 26, the next day of hearing, the court may take appropriate action.

"You (CBI) should not have filed the charge sheet. It is only increasing the pendency of the court. A lot of time of the court has been wasted due to this," Special Judge O P Saini said.

The agency had on July 19 filed a charge sheet against the Congress leader, his son Karti, ten individuals including public servants and six companies as accused in the case.

The judge allowed the CBI's request for grant of some time after senior advocate Sonia Mathur, representing the agency, informed the judge that sanctions are awaited.

"If the sanction is not received, appropriate actions will be taken," the court said.

"Granting of sanction is under active consideration of the government," Mathur said.

Chidambaram's name is among the persons against whom sanction for prosecution from authorities concerned was awaited.

The court also adjourned a money laundering case, which is an off-shoot of the Aircel-Maxis deal case, against Karti and others, after Mathur and advocates N K Matta and Nitesh Rana requested an adjournment on behalf of the Enforcement Directorate (ED).

The ED had on July 13 filed a charge sheet against Karti and others for the alleged offence of money laundering.

However, the former Union minister was not arrayed as an accused in the case.

In the case filed by CBI, Mathur told the court that the agency was expecting sanctions for prosecution from authorities concerned in about four weeks.

The counsel told the court that there were serving public servants and some retired ones against whom the sanctions would be needed before proceeding with their prosecution in the case.

The CBI had filed the charge sheet for the alleged offences of criminal conspiracy under the Indian Penal Code (IPC), public servant taking illegal gratification, punishment for abetting this offence and public servant committing criminal misconduct under the Prevention of Corruption Act.

If convicted, the offences entail a maximum punishment of seven years.

The agency has alleged that when foreign investment in Aircel by Malaysian telecom major Maxis was cleared by the finance ministry in March 13, 2006, a payment of Rs 26 lakh was made by Aircel to Chennai-based Advantage Strategic Consulting, officials said.

It is alleged that Advantage Strategic Consulting was indirectly controlled by Karti and had raised an invoice on March 29, 2006 against which Aircel made a payment on April 1, 2006.

The CBI has alleged that Chess Management Services Holding Ltd, a company in which Karti is promoter and director, also received Rs 87 lakh in several installments from an associate company of Maxis, they said.

During investigation, the agency had asked Chess Management officials and Karti to produce the software which was allegedly provided to Maxis for a fee but they could not produce any such software, they said alleging that it was a bribe for the clearance of foreign investment proposal which was laced with several irregularities.

The agency said this is a fresh charge sheet in the matter even as it stems from the FIR related to Aircel-Maxis deal registered in 2012 in which the then telecom minister Dayanidhi Maran and others have been charged and later discharged by a trial court. The CBI has filed an appeal against the court order.

The officials said this is a completely separate aspect of the case related to clearance of now defunct Foreign Investment Promotion Board (FIPB), under Finance Ministry, to the foreign investment clearance of Maxis in Aircel.

Among others listed in the charge sheet are the then secretary (economic affairs) Ashok Jha, the then additional secretary Ashok Chawla, the then joint secretary in finance ministry Kumar Sanjay Krishna, and the then director in the ministry Dipak Kumar Singh.

The agency has also named in the charge sheet former CEO of Aircel V Srinivasan, nephew of Chidambaram A Palaniappan who was also the promoter of Chess Management Services, Malaysian nationals Ananda Krishnan Tatparanandam, Augustus Ralph Marshall, both linked with Maxis, one S Bhaskaraman, and the then under secretary in the ministry Ram Sharan.

The agency has charged all the accused with criminal conspiracy, bribery and abuse of official position.

It is alleged that FIPB approval in the Aircel-Maxis FDI case was granted in March 2006 by Chidambaram even though he was empowered to accord approval on project proposals only up to Rs 600 crore and beyond that it required the approval of the Cabinet Committee on Economic Affairs (CCEA).