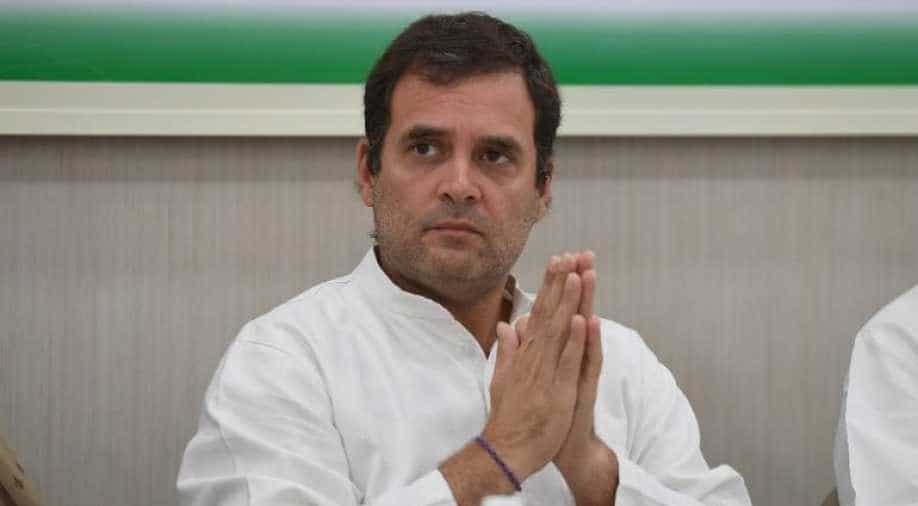 In a first such meeting since Gandhi announced his decision to abdicate from the responsibility, Chief Ministers persuaded him not to quit.

Chief ministers of five Congress-ruled states on Monday urged Rahul Gandhi not to leave the post of the party president.

In a first such meeting since Gandhi announced his decision to abdicate from the responsibility, Chief Ministers persuaded him not to quit.

Speaking to ANI, Puducherry Chief Minister V Narayanasamy said, "I told Rahul Gandhi that Congress cannot work without him. After his mother Sonia Gandhi, if there is a leader who can run the party, it is him."

Narayanasamy said that in a two-hour meeting, Gandhi was urged to re-think his decision, but he chose to remain quiet throughout.

Gandhi, who became the party president in 2017, offered to step down from his post at the Congress Working Committee (CWC) meeting on May 25, taking the moral responsibility for the Congress' abysmal performance in the 17th General Elections.

His resignation offer was, however, unanimously rejected by the CWC.

Despite senior members making serious attempts to convince the 49-year-old party chief to rethink his decision, he remains unfazed.

Delhi Congress Working President Rajesh Lilothia said the party respects the decision taken by Gandhi but will continue to convince him not to leave the post.

Even though there is no official statement on the matter, sources said that several party leaders will sit on a hunger strike at the party headquarters today to protest again Gandhi`s decision to step down.

A senior Congress leader and Congress Working Committee (CWC) member told ANI, "It has been over a month since the last meeting of CWC, in which Rahul Gandhi had decided to quit, was kept.

Now, the senior leaders must call a meeting of CWC to decide on the issue.

"The Congress won 52 seats in the recent general elections, which is just eight more than what the party won in 2014 polls.