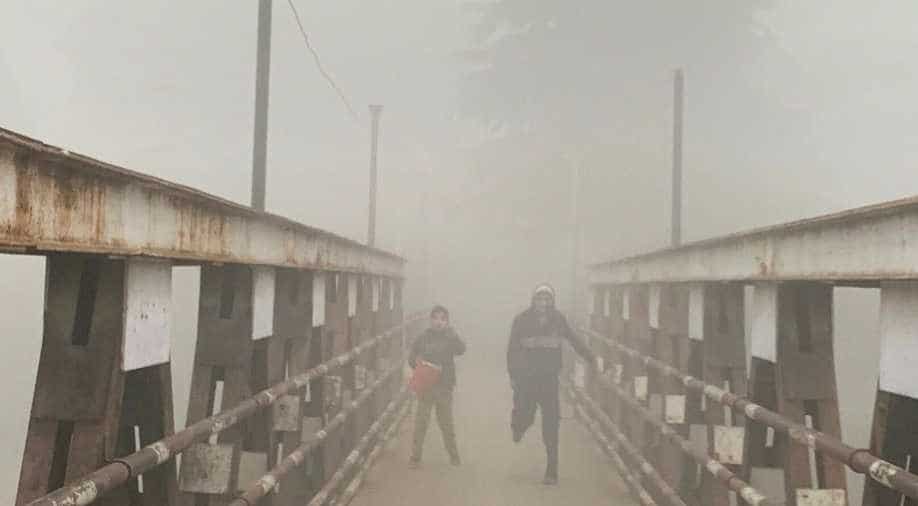 Waterbodies in several rural areas of Kashmir has also started freezing much before the harsh winter period locally known as 'Chillai-Kalan'.

The cold wave has intensified in the Kashmir valley with extreme foggy conditions making it hard for the common man to resume normal work.

Srinagar, the summer capital of Jammu and Kashmir is witnessing heavy fog throughout the day leading to the cancellation of all flights from the city airport since Saturday last week.

Waterbodies in several rural areas of Kashmir has also started freezing much before the harsh winter period locally known as 'Chillai-Kalan'.

On Monday, the traffic department asked people to drive slow and use fog lights. The cold wave has also forced authorities to shut lower primary schools in the region with the decision to shut all schools is expected soon.

The residents of Srinagar say that they have never witnessed dense fog cover in the city in years.

"I have never seen fog making everything invisible during the daytime," said Abdul Ahad, who says he's in his 50's.

The morning flights from Srinagar on Monday couldn't take off due to low visibility, said an official. The Srinagar-Jammu national highway which connects valley from the rest of India was thrown open for traffic after remaining closed on Sunday.

The meteorological department has predicted heavy to moderate snowfall in the valley from Wednesday which according to them would provide relief to the residents from the fog but would further dip the temperature.

"The relative humidity is more than 70 per cent and the morning temperature is also below the freezing point, so these two conditions make the fog grow," said Mukhtar Ahmad, in charge, Indian meteorological department adding that people travelling in their vehicles should take precaution and the visibility would improve in the coming days.

Drass in Ladakh was the coldest place in entire India where temperatures soared to minus 21.4 degrees Celcius and freezing water bodies and taps.

Locals told WION that people were forced to adapt traditional methods to beat the cold.