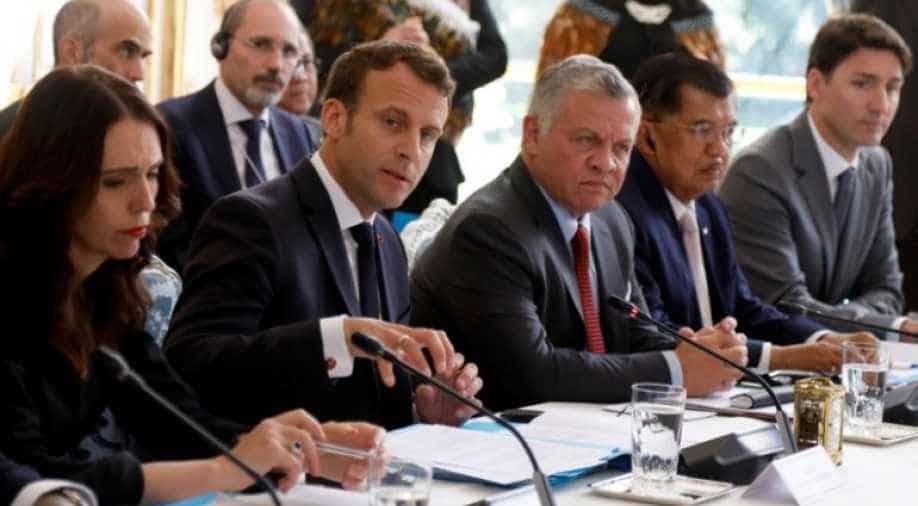 French President Emmanuel Macron and New Zealand's Prime Minister Jacinda Ardern attend a launching ceremony together with other state leaders for the 'Christchurch Appeal' against terrorism at the Elysee Palace in Paris, France, May 15, 2019. Photograph:( Reuters )

'Christchurch call to action' -- was named after the New Zealand city where 51 people were killed in an attack on mosques.

India joined France, New Zealand, Canada and several other countries on Wednesday in launching a major initiative in Paris to combat terrorism and extremism online and secure the internet.The initiative — 'Christchurch call to action' -- was named after the New Zealand city where 51 people were killed in an attack on mosques, officials said.

The non-binding agreement 'Christchurch Call' has been signed by 18 leaders from around the globe, including British PM Theresa May and Canadian PM Justin Trudeau.

"While the United States is not currently in a position to join the endorsement, we continue to support the overall goals reflected in the call. We will continue to engage governments, industry and civil society to counter terrorist content on the internet," White House said in a statement.

The statement cited freedom of expression and freedom of the press as reasons to not join the agreement.

"We encourage technology companies to enforce their terms of service and community standards that forbid the use of their platforms for terrorist purposes. We continue to be proactive in our efforts to counter terrorist content online while also continuing to respect freedom of expression and freedom of the press," the statement read.

'Christchurch Call' was announced on Wednesday in Paris at a meeting of digital leaders of G7 nations, two months after the mass shooting on two mosques in Christchurch that left 51 people dead and about as many wounded. The summit was co-organised by New Zealand Prime Minister Jacinda Ardern and French President Emmanuel Macron.