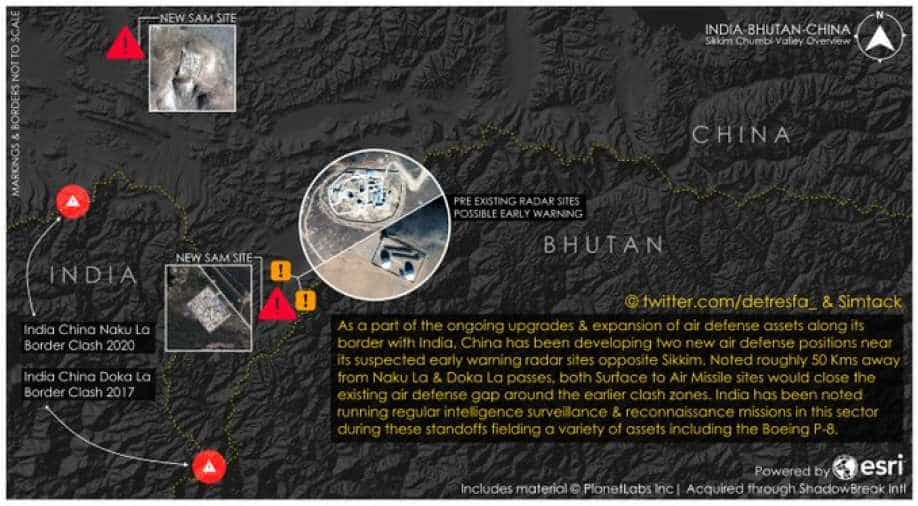 The Chinese efforts to build air defence sites along the Line of Actual Control (LAC) come amid deepening tensions with India.

A prominent Twitter handle that posts satellite imagery -- @Detresfa_ -- made a post on Friday that put out a few images as part of a joint study with Sim Tack of the geopolitical intelligence platform Stratfor.

The handle said the location is near the China, Bhutan and India tri-junction at Doklam, where New Delhi and Beijing were locked in a stand-off in 2017.

Investigations with @SimTack of the #Doklam region in the #China, #Bhutan, #India tri junction area present new evidence of PLA air defense infrastructure being constructed roughly 50 Kms from known clash points of the #IndiaChinaStandoff of 2017 & 2020 pic.twitter.com/5JWFZaoXrX

The defence infrastructure is being constructed roughly 50 km from the 2017 stand-off site, and also Naku La in Sikkim, which witnessed a clash between Indian and Chinese soldiers this year.

India and China had disengaged in Doklam in 2017 after a 73-day stand-off, but the People's Liberation Army (PLA) continues to dominate the areas it had ventured into.

If true, the Chinese efforts to build air defence sites along the Line of Actual Control (LAC) come amid deepening tensions with India.

(DISCLAIMER: Wionews.com cannot independently verify the authenticity of the imagery.)