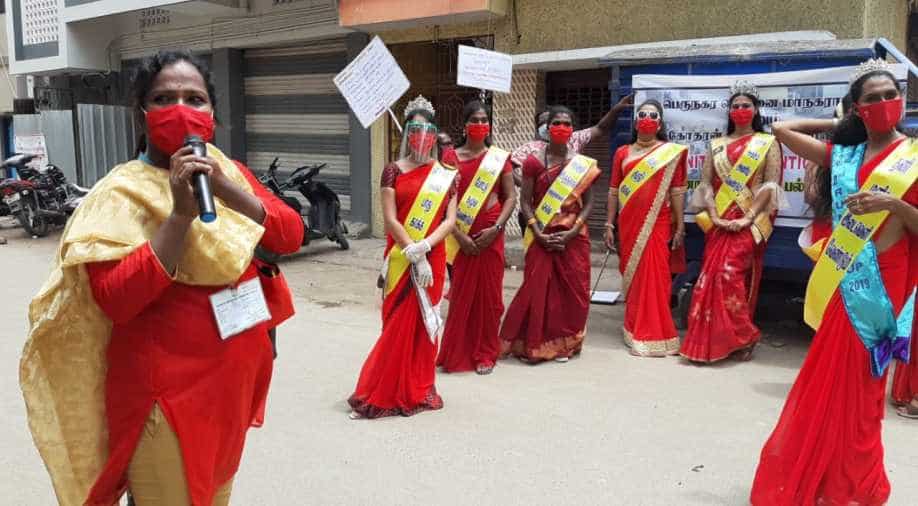 Besides the awareness creation, they go around the assigned localities and distribute free cloth masks and immunity booster drinks. Photograph:( WION )

The Transgender community in Chennai is actively participating with the government and the civic body in the battle against the coronavirus.

From creating awareness to conducting door-to-door screening and coordinating ground-level efforts, members of the trans community and their NGOs have been at the frontlines in many badly affected areas and slums across the city.

This is said to be a first-of-its campaign involving Transgenders working with the government authorities in fighting the deadly pandemic.

“We are primarily assigned 3 tasks:  Awareness, Prevention and Control. Awareness involves going on foot and spreading the word on personal hygiene, hand washing, immunity-boosting measures and physical distancing. We go in groups around localities and announce via loudspeakers and also speak to people individually and clarify their doubts” Jaya, General Manager of the NGO Sahodaran told WION.

Besides the awareness creation, they go around the assigned localities and distribute free cloth masks and immunity booster drinks. As a part of control measures, they individually cover about 150 houses and conduct fever surveillance and check for symptoms. In case, people with symptoms are found, they are advised to go to the nearest fever clinic or the Primary health centre for further checks.

“Recently we even conducted some new initiatives where we used to dance, drama and storytelling to create awareness. We hold placards, shout slogans, and even had transgenders who won national-level beauty contests participate in the awareness campaign.” Jaya added.

While the 100-day scheme has been a boon to the transgender community, its not as easy as it looks. They have to fight Covid-19 and also the stigma in people’s minds.

“Initially the public were apprehensive, there was stigma and discrimination. Their cooperation was less and they even questioned its on why we were coming to their houses daily. But eventually, the rapport got better and they started seeing us as family members” Sudha the director of Thozhi NGO told WION.

Jaya adds that their transgender community is glad to serve the society in their little ways. “We are fighting corona and stigma. We could say that the transgenders are joining this fight for their basic economic needs and, but we’re taking these risks for the welfare of fellow members in the society”.

Dhanabashyam of Snegithi NGO says that this has been a very good experience for her and that it also helps them financially. “We work for about 8 hours stating 7:30 and the corporation also provides us with breakfast and lunch. We are glad for the opportunity that has come our way”.