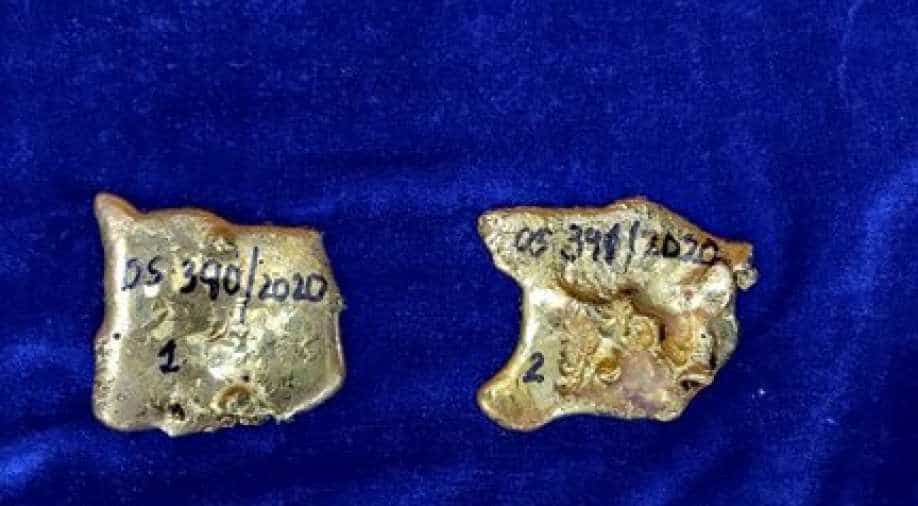 The yellow metal was smuggled in by passengers who had entered via relief flights operated from the West-Asian nations.  Photograph:( WION )

The yellow metal was smuggled in by passengers who had entered via relief flights operated from the West-Asian nations.

In three instances of Gold smuggling at the Chennai International Airport since the nationwide lockdown was imposed in March, Air Customs officials have seized a total of 2.21 Kg gold under Customs Act 1962. The yellow metal was smuggled in by passengers who had entered via relief flights operated from the West-Asian nations.

On Tuesday night, Kasimani Kolanji, (22) and Murugan Chandran,(38) of Thanjavur, Tamil Nadu arrived from Dubai by Air India Express Airlines Flight No. IX-1644. They were intercepted by Air Intelligence Unit officers at exit on suspicion of carrying gold. On their personal search, four polythene pouches(two each) containing gold paste were found concealed inside the waistline/belt portion of their jeans. On extraction by heat treatment, 731 grams of gold of 24K purity valued at Rs. 34.5 lakhs was recovered and seized.

On Tuesday morning, Khaleel Ahamed, 24, who arrived from Dubai by Air India express flight IX-1644 was intercepted at exit. On frisking, a packet of gold paste was found to be concealed in his innerwear. On extraction 280 grams of gold valued at Rs.15.60 lakhs was recovered and seized.

Earlier on Monday night, Air Intelligence officers apprehended two persons outside airport, who had attempted to flee on seeing them. On their personal search, five packets of gold in paste form were recovered. They were identified as Kaja Mohideen,(39), and S Peer Mohideen, (33), both residents of Chennai. They informed officials that the packets were handed over to them by five passengers who had arrived from Sharjah by Air India flight AI-1984. The passengers also confirmed they had handed over one packet each to them. On extraction, gold weighing 1.2 Kg valued at Rs. 66.73 lakhs was recovered and seized. Both receivers were arrested.

"We have been alert throughout and this is the first series of gold seizure since the time nationwide lockdown was imposed. While gold smuggling in the form of bars/biscuits is easier to detect, paste form is a fairly undetectable modus operandi. We have understood that the passengers were laborers and that they were handed over the packets to smuggle them in for small amounts of money. This is happening at the time when gold rates are shooting up” Rajan Chaudhary, Commissioner Customs told WION.