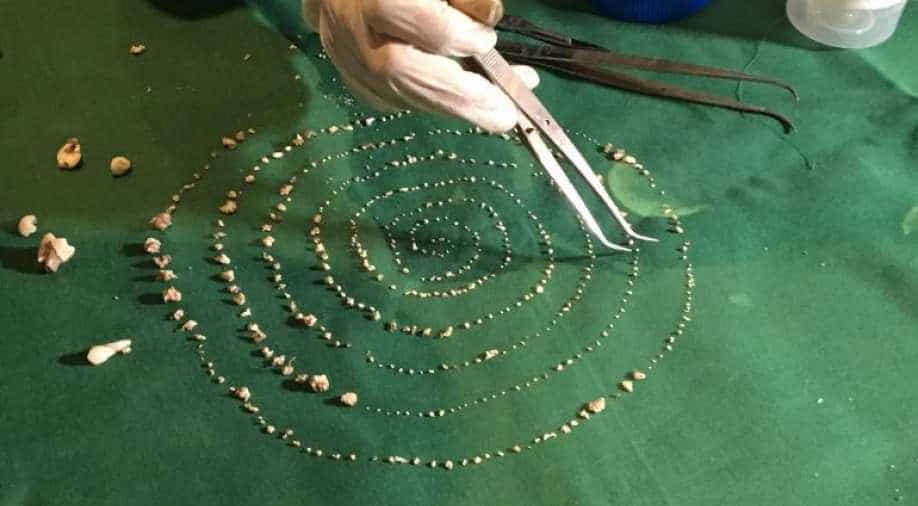 Teeth of varying shapes and sizes that were extracted from the surgically removed non-cancerous tumour. Photograph:( WION )

Doctors had observed that despite the boy being seven years old his permanent tooth had not erupted.

Doctors at Chennai’s Saveetha Dental College, Institute of Medical and Technical Science were in for a shock as they extracted 526 teeth from a 200gram non-cancerous tumour that was surgically removed from the lower-right jaw of their 7-year-old patient Ravindran.

According to the doctors, this is the maximum number of teeth extracted from a patient and the hospital has applied for a place the Guinness and Limca Book of Records.

Over four years ago, Prabhu and Rajakumari had taken their then 3-year old son Ravindran for a medical checkup for to his swollen jaw. As the doctors at the Government Hospital were said to have not diagnosed the condition, the parents left it unattended as the boy did not seem to face any pain or discomfort and was unable to cooperate with the medical examination.

This year, as the swelling in the jaw, had increased the parents got Ravindran medically examined by the Doctors at Chennai’s Saveetha Dental College, Institute of Medical and Technical Science. 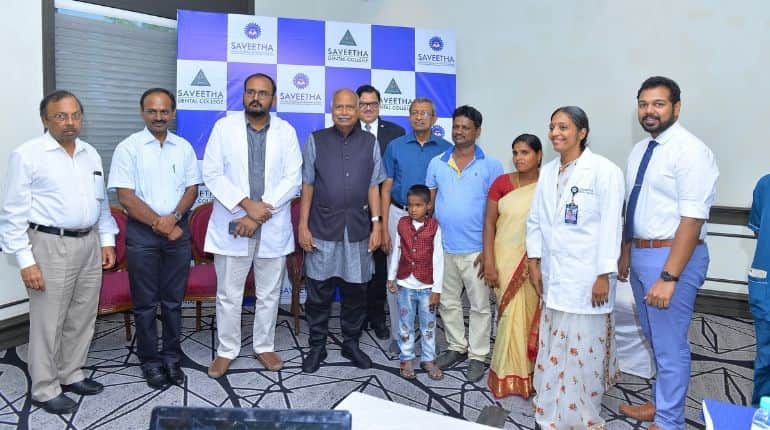 Doctors of Saveetha Dental College with the 7-year old patient Ravindran and his parents at the media interaction.

Doctors had observed that despite the boy being seven years old his permanent tooth had not erupted. An X-Ray and CT Scan revealed that a lot of small rudimentary tooth in the lower-right jaw. The Doctors then decided to perform surgery.

Dr Senthilnathan, Professor, Dept of Oral and Maxillofacial surgery said, “Under general anaesthesia, we removed a sack-like, non-cancerous tumour that weighed about 200 grams and measured 4cm wide and 3.5cm tall. In medical terms, this condition is referred to as Compound Composite Odontone. Our surgical procedure took over an hour and a half”.

He added that, if the patient were to be an adult, the jaw would have to be surgically reconstructed post the surgery, but in this case, an operative procedure called ‘Conservative management’ was employed to ensure that the jaw remained intact.

While the surgery was completed in less than two hours, the Pathologists that examined the tumour post its removal had to do their precise, delicate work for nearly five hours to extract the tooth from the tumour.

“Normally for such a big tumour we perform a bread-loaf section to vertically slice and study the specimen, but in this case, we decided to cut it open like a bag. As we cut it open we spotted multiple teeth, and this continued even as we went deeper and more pearls were emerging. Every bit of tissue was a tooth, and tissue had the enamel of the tooth, said Dr Pratibha Ramani, Professor and Head, Dept of Oral and Maxillofacial Surgery.

Speaking on the probable causes of the tumour, Doctors said, “It is usually believed that it is genetic, but the siblings of the boy do not have this condition. It could be from radiation, chemical or other environmental influences”. Quoting from an ongoing study the doctors also mentioned that mobile phone radiation could also be a minor factor among others, in causing such disorders.

“Right side lower was only affected and Permanent tooth might not grow there, whereas the growth in all other regions of the jaw is normal. When the boy turns 16, we might have to replace some teeth in the lower right jaw with implants. However, there is no chance of relapse of this tumour”, elaborated the Doctors on the way ahead for the boy.

Speaking to reporters, the boy’s parents said, “We are very happy that he is fine now, initially we were really worried that we had to take a CT scan for something like a jaw swelling and we were also in a dilemma about the course of treatment.”

Responding to queries on the possible use of Local Anesthesia instead of General Anesthesia, Doctors said, “Local anaesthetic is for single tooth removal, whereas a Tumor involves the jaw and we are removing an anatomical part of the body. If the tumour is less than 1cm in size, then we could use a local anaesthetic, but clearly, we were dealing with a bigger tumour.”

Doctors also emphasized the need for counselling the young patient and his parents on an oral, maxillofacial surgical procedure. They said that counselling is important to make the young child and the parents understand the significance of the course of treatment and are mentally prepared for it.