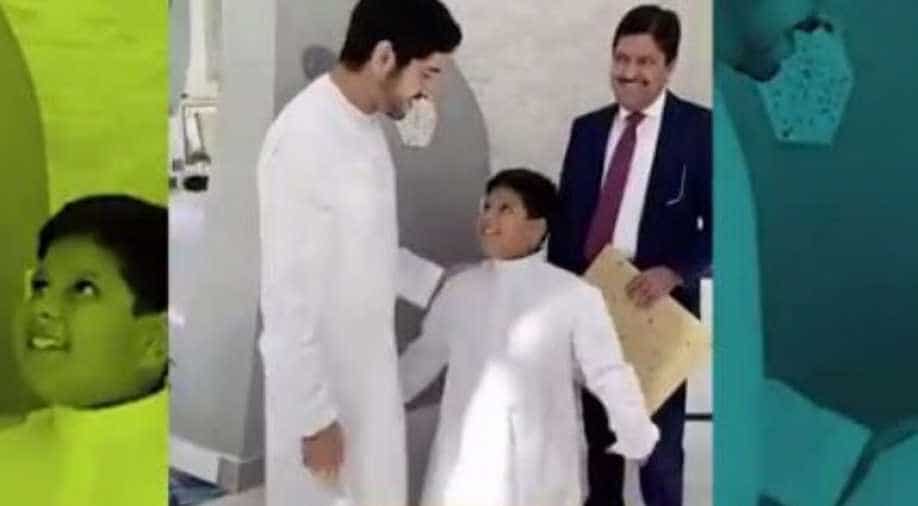 As sheikh Hamdan embraced young Abdullah in a bear hug — it was truly a moment of joy.

A couple of days back, we told you the story of Abdullah — a 7-year-old boy from Hyderabad who has been diagnosed with 3rd stage cancer.

As you might remember, Abdullah is an ardent fan of Dubai's crown prince — his Highness Sheikh Hamdan bin Mohammad bin Rashid al Maktoum.

He wanted to meet his idol more than anything else in the world. And true to his nature — the crown prince has fulfilled Abdullah's greatest desire.

As sheikh Hamdan embraced young Abdullah in a bear hug — it was truly a moment of joy.

For the 7-year-old, the meeting could not have been more special. Abdullah suffers from stage 3 cancer. It was his wish to meet the crown prince of Dubai. His hero and role model whom he followed on youtube and Instagram.

The prince is the role model of the Indian child who is suffering from cancer pic.twitter.com/EbMuxKZlVK

From adventure sports to poetry, Sheikh Hamdan is a prince of many accomplishments and millions of followers all over the world.

But what makes him truly loved is gestures like these. Granting a little boy’s request who came from India to see him. The trip was worth the effort.

Sheikh Hamdan, known to his fans as fazza, hosted Abdullah and his family, clicked pictures with them. Inquired about Abdullah's treatment and asked his parents to stay positive.

The crown prince also had some fun with Abdullah's younger brother.

For Abdullah — this was a dream come true. He later told his mother that he was even more impressed with the crown prince after meeting him.

And that he had fallen in love with the crown prince's voice. The family presented Sheikh Hamdan with a portrait and a golden replica of the iconic Charminar.

To Abdullah's absolute delight, he was also given a tour of the crown prince’s stables. He saw the royal elephants and giraffes.

The prince’s love for pets — especially horses, is something that Abdullah admires a lot. Abdullah's love for the crown prince is much more than just fandom.

During chemotherapy, his parents used Sheikh Hamdan's name to divert Abdullah's mind from the pain. Those close to him, talk highly of the crown prince's kind nature. And with this gesture — he has once again re-affirmed the same.

Not everyone has the power to enrich someone else's life. But if you are lucky enough to be in such a position — make sure you don't let the opportunity pass.