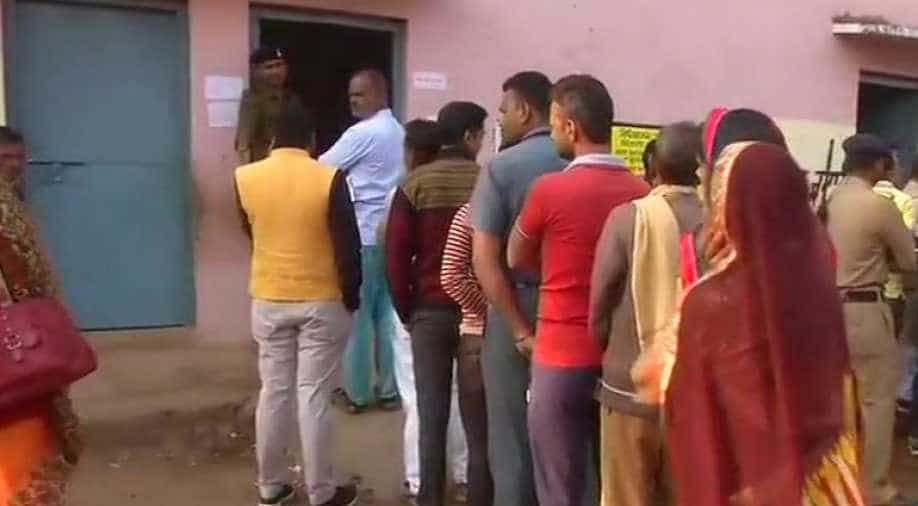 Visuals from a polling booth in Kolaras. Photograph:( ANI )

Prime Minister Narendra Modi and Congress chief Rahul Gandhi were the star campaigners for their respective parties and addressed a number of poll rallies across the state.

Curtains came down Monday evening on the acrimonious campaigning for the high-stakes November 28 assembly polls in Madhya Pradesh, where star campaigners of the BJP, the Congress and other parties addressed a series of rallies and held roadshows to seek support for candidates.

Canvassing came to a formal end at 5 pm and voting to elect a new 230-member assembly will take place on Wednesday. As many as 2,907 candidates are in the fray.

Prime Minister Narendra Modi and Congress chief Rahul Gandhi were the star campaigners for their respective parties and addressed a number of poll rallies across the state.

They freely exchanged barbs and traded charges, raising the political temperature in the central state.

National and state issues, including the Rafale deal, demonetisation, development, GST, corruption, dynastic politics and the Shivraj Singh Chouhan government's performance, among others, prominently figured in their speeches.

BJP president Amit Shah, too, campaigned in the state, where his party is seeking a fourth straight term in office.

A purported video of MP Congress chief Kamal Nath on Muslim votes went viral during the last leg of electioneering with the BJP accusing the main opposition party of dividing society for electoral gains.

Sahasrabuddhe said electioneering started with "development" and "politics of performance" being discussed, but the Congress stooped low by dragging Modi's parents into the campaigning.

Addressing a separate press meet in the afternoon, chief Congress spokesperson Randeep Singh Surjewala claimed his party was set to come back to power in the state after 15 years.

Surjewala targeted BJP Chief Minister Shivraj Singh Chouhan, who is seeking a fourth term of office, over the lack of development in his assembly constituency Budhni.

The Congress leader claimed 90 per cent of people in Jait, Chouhan's native village, are living below the poverty line. He said poverty had increased in MP under the BJP rule.

Jha, however, countered Surjewala's claims on poverty and dubbed them false.

The BJP is contesting all the 230 seats, while the Congress has fielded 229 candidates, leaving one seat, Jatara in Tikamgarh district, for its ally - Sharad Yadav's Loktantrik Janata Dal (LJD).

Besides the Congress and the BJP, other parties like the BSP, the SP, the AAP and the SAPAKS (a new outfit opposed to caste-based quota system) are also in the fray.

While the BJP is fighting the polls under the leadership of Chouhan, the Congress has not projected its chief ministerial candidate.

In the final days of electioneering, Modi crisscrossed the state and addressed 10 public meetings.

Gandhi, during his whirlwind electioneering tour of MP, held 12 public meetings and roadshows this month.

Amit Shah camped in Madhya Pradesh, where he addressed public meetings and held roadshows. The BJP chief held a roadshow in Indore hours before the campaigning ended.

During the electioneering, Gandhi announced his party will waive the loans of farmers in 10 days of coming to power.

Modi, speaking at one of his rallies, said farmers were in debt due to the "wrong policies" of the previous Congress governments and maintained the Centre was working on doubling income of cultivators by 2022.

The BJP primarily focused on the 10-year "misrule" of former Congress Chief Minister Digvijay Singh and listed the achievements under Chouhan.

The ruling party said Madhya Pradesh shed the 'BIMARU' (laggard) tag under Chouhan and saw all-round development under his leadership.

The highest number of 34 candidates are in the Mehgaon constituency in Bhind district, while the lowest -- four -- in Gunnor in Panna district, an EC official said.

According to the official, there are around 1,100 independents in the fray.
The BSP has fielded 227 candidates, while the SP is contesting on 51 seats.

The Aam Aadmi Party, contesting the Madhya Pradesh elections for the first time, has fielded 208 candidates.

In the last assembly polls, the BJP had won 165 seats, the Congress 58, the BSP four and independents three.