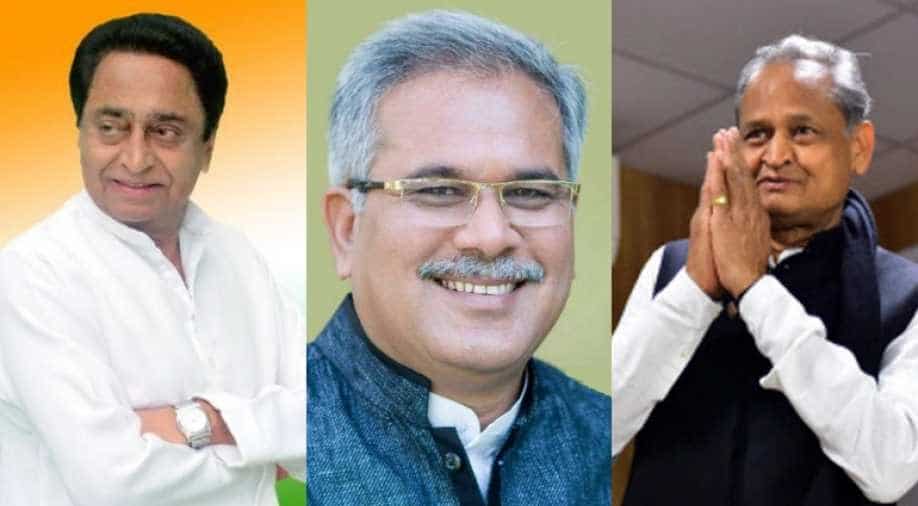 The oath-taking ceremony of the three newly-elected Congress governments in Madhya Pradesh, Rajasthan, and Chhattisgarh will take place today back-to-back at 3 different times.

Congress has arranged consecutive swearing-in ceremonies in three states it wrested from the BJP in just-finished assembly polls.

Ashok Gehlot will be sworn-in as Rajasthan Chief Minister in Jaipur in the morning around 10.30 am, Kamal Nath will take the oath in Madhya Pradesh's capital Bhopal around 1.30 pm followed by Bhupesh Baghel in Chhattisgarh's Raipur at 4.30 pm.

Congress president Rahul Gandhi is expected to attend all the events.

In the recently-concluded Assembly elections, the results of which were declared on December 11, the Congress dealt a massive blow to the BJP by ousting its governments in the three `Hindi heartland` states.

While the party registered a resounding victory in Chhattisgarh, winning 68 seats as opposed to the BJP's 15, in Rajasthan the Congress bagged 99 seats, and the BJP 73.

Madhya Pradesh saw a nail-biting fight, where the Congress managed to bag 114 seats out of a total of 230. The Congress then roped in seven seats, two from the BSP, one from Samajwadi Party and four Independents candidates, to form the government.

The Congress had completed the process of selecting chief ministers for all three states it won last week, including Madhya Pradesh and Rajasthan.

On Thursday, Gandhi had chosen Kamal Nath to head the government in Madhya Pradesh, while the decision over Ashok Gehlot as the chief minister and Sachin Pilot as his deputy in Rajasthan was announced on Friday. The party did not rule out the possibility of having a deputy chief minister in Chhattisgarh, too.