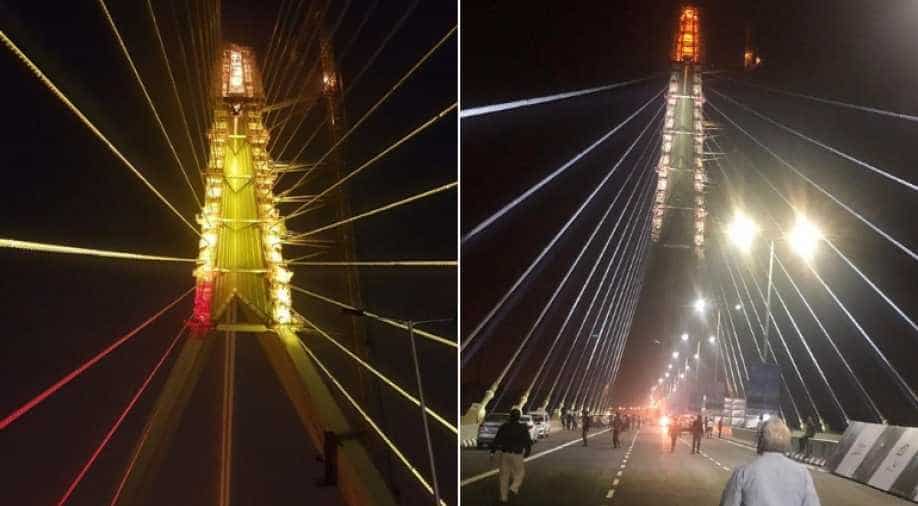 The bridge was proposed for the first time as early as in 1997 at an initial cost of Rs 464 crore.  Photograph:( Twitter )

Deputy Chief Minister Manish Sisodia inspecting the infrastructure project on Friday and invited members of the public to the inauguration event today evening.

Delhi Chief Minister Arvind Kejriwal is scheduled to inaugurate the much-awaited Signature Bridge on the Yamuna in Delhi on November 4 and it will be thrown open for public on November 5.

The bridge will reduce travel time between north and northeast Delhi, and will have designated selfie spots.

Delhiites will be able to enjoy a panoramic view of the city from the top of the bridge, where they will be taken in four elevators with a total capacity of carrying 50 people.

The elevators area likely to be operational in two months, an official said.

He said the bridge will serve as a tourist destination with the 154-metre-high glass box giving a bird's-eye view of the city to visitors.

Talking to reporters during the inspection, Sisodia said the bridge will become a tourist spot.

Announced in 2004, the bridge has missed several deadlines since 2011.

The proposal for the bridge, mooted in 2004, received approval of the Delhi Cabinet in 2007. It was initially expected to be completed at a modified estimate of Rs 1,131 crore for the Commonwealth Games, held in Delhi in October 2010.

The bridge will share the burden of vehicular traffic currently borne by the Wazirabad bridge.