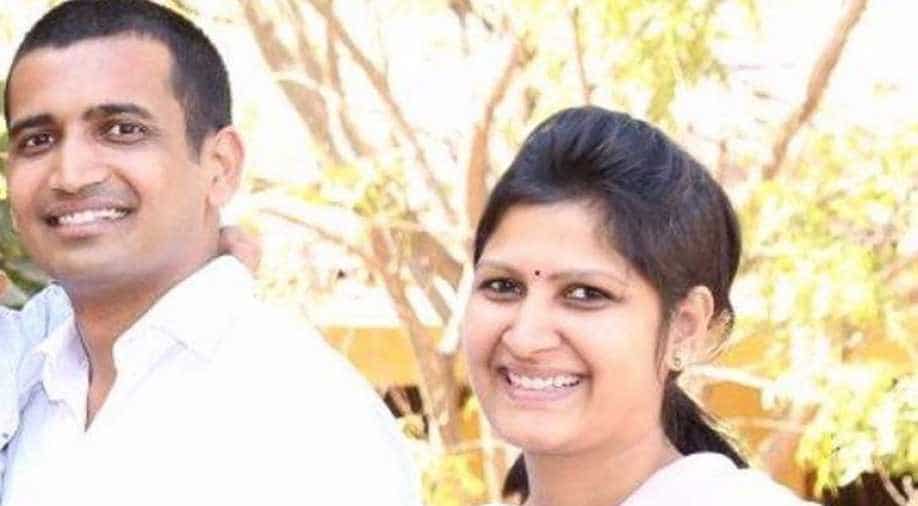 Anamika Rathore was initiatied into monkhood on Monday (September 25). In pic, with her husband Sumit and their three-year-old daughter Ibhya. Photograph:( Facebook )

The function of Anamika's ritual was held in Surat under the supervision of Acharya Ramlal Ji Maharaj, who had also initiated her husband to monkhood

Anamika Rathore, who along with her husband Sumit, had decided to take up monkhood, leaving behind their three-year-old daughter and property worth Rs 100 crores was initiated into monkhood on Monday.

Anamika, 34, became a sadhvi (hermit) followed by her husband Sumit Rathore who became a Jain monk on Saturday. She had earlier postponed her diksha or initiation because of incomplete legal formalities, a media report said.

The function of  Anamika's ritual was held in Surat under the supervision of Acharya Ramlal Ji Maharaj, who had also initiated her husband to monkhood.

Both took up monkhood amidst opposition from several quarters.

The couple faced a lot of criticism from the community, mainly for leaving their three-year-old daughter, Ibhya, as per media reports.

Anamika, now Sadhvi Anakaar, had presented her daughter's adoption papers before the officials, saying "My child will not become an orphan if I leave her. My brother and sister-in-law who are issueless have gladly adopted her. My father's family is rich and so is my father-in-law's family. The charges levelled by public representatives and others who had complained to the NHRC are false and had been done to get cheap publicity," according to the religious leader.

A few social activists also moved to the local administration in Neemuch and Surat and had written to the National Human Rights Commission (NHRC).

In response, Saint Udai Muni, who is quite high in the Jain hierarchy, said no judicial or administrative power can intervene in the religious affairs of minorities. He added that the Jain religious leaders won't tolerate interference by "outsiders".

The activist who has moved to NHRC says he had no wrong intentions and was only concerned about the little girl and her future.

Sumit and Anamika, who married four years ago, decided to take to monkhood when Ibhya was only eight months old. They started to live separately as a preparation and have taken a vow of silence.