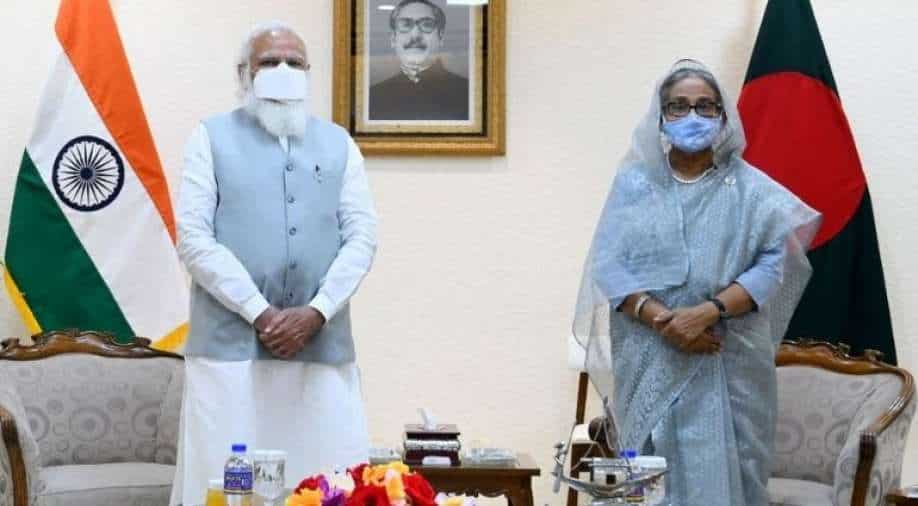 Prime Minister Narendra Modi on Saturday handed over a representational key of 109 life-saving ambulances to his Bangladesh counterpart Sheikh Hasina in Dhaka.

During the delegation-level meeting, he also handed over a representational item to Bangladesh PM Sheikh Hasina as a symbol of India's gift of 1.2 million Covid vaccine doses.

"Reiterating the highest priority India attaches to Bangladesh under India's #NeighbourhoodFirst Policy! Prime Minister @narendramodi and Prime Minister Sheikh Hasina are together for a bilateral meeting," the spokesperson wrote earlier.

Along with that, an exchange of MoUs between India and Bangladesh also took place in the presence of the two leaders. Earlier today, the Prime Minister visited Orakandi Temple and addressed a gathering. "Both India and Bangladesh want to see the world progressing through their own progress. Both the nations want to see stability, love, and peace in the world instead of instability, terror and unrest," he said.

The Prime Minister, who arrived in Bangladesh on Friday, is on a two-day visit to the neighbouring country. He also offered prayers at the Orakandi Temple located at Kashiani Upazila in the Gopalganj district of Bangladesh.

The Prime Minister also informed that the Indian government will undertake the construction work of a multi-purpose community hall at Jeshoreshwari Kali Temple.

After that, he paid tribute to Bangladesh's 'Father of the Nation' Sheikh Mujibur Rahman at Bangabandhu Mausoleum Complex, Tungipara. He signed the visitors' book and also planted samples at the complex. PM Modi was accompanied by his Bangladeshi counterpart Sheikh Hasina during his visit to the complex.

Prime Minister Narendra Modi met with several community leaders, including representatives of minorities in Bangladesh, mukhtijoddhas, friends of India and youth icons on the first day of his visit.

The Prime Minister received a warm welcome from the Indian diaspora as he marked his first foreign visit since the Covid-19 outbreak. Soon after he arrived in Dhaka, he visited the National Martyrs' Memorial (Jatiyo Sriti Shoudho), the National monument of Bangladesh to pay tributes to the valour and the sacrifice of those who gave their lives in the Bangladesh Liberation War of 1971. He also planted a sapling of Arjun tree at the memorial premises and signed the visitor's book in the monument, MEA informed.