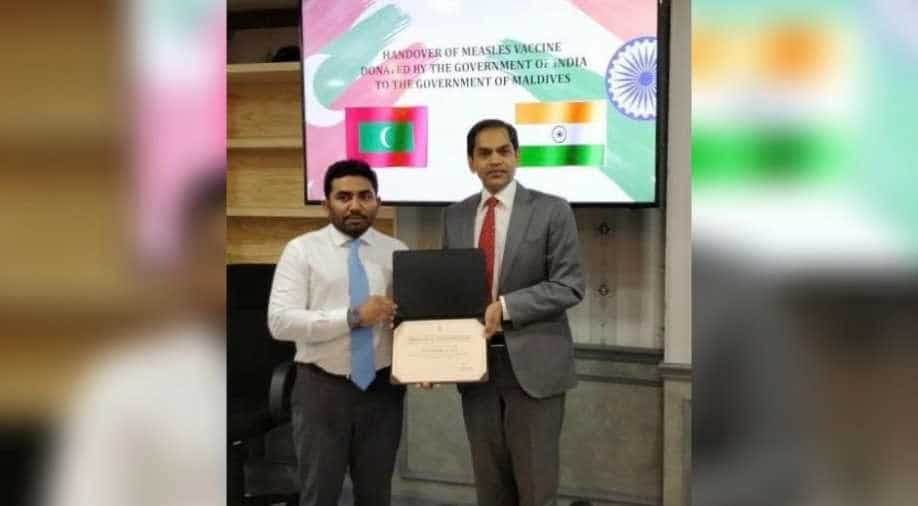 The consignment, procured from the Serum Institute of India, was handed over by Indian envoy to the Maldives Sunjay Sudhir to the Maldivian health minister Abdulla Ameen. Photograph:(WION)
Follow Us

The Indian Ocean Island country is facing an outbreak of the measles as  4 cases were tested positive in last one week.

Continuing with its 'neighbourhood first' policy, India on Thursday supplied Maldives 30,000 doses of Measles vaccines within 72-hours of the request by the country.

The Indian Ocean Island country is facing an outbreak of the measles as  4 cases were tested positive in last one week.

The Maldives had approached Denmark, which said that it will take one month to supply the vaccine, while UNICEF also gave around the same time-period of 4 weeks.

On Monday afternoon, the country's health ministry approached the Indian mission which agreed to send the consignment.

The consignment, procured from the Serum Institute of India, was handed over Maldivian health minister Abdulla Ameen. by Indian envoy to the Maldives Sunjay Sudhir today.

A release from the mission said, "India’s swift response underlines that India has the capability to respond quickly and health remains one of the strongest pillars of bilateral cooperation. This gesture also emphasises the mutually supportive roles of India’s neighbourhood first policy and the Maldives’ India first policy, acting for the benefit of our peoples."

New Delhi is already engaged in the Maldives' health sector. It is building a 100-bed cancer hospital in Hulhumale.

This is not the first time, India has responded to an emergency in the Maldives.

In 2015, India responding to the water crisis in Malé due to breakdown of the main RO plant, airlifted water and sent supplies by ship to the country.

In 2004, after the tsunami struck the country, it sent immediate relief.

In 1988, India responded to an SOS from the then President Maumoon Abdul Gayoom on account of Coup with swift action by sending paratroopers onboard IL-76 aircraft.