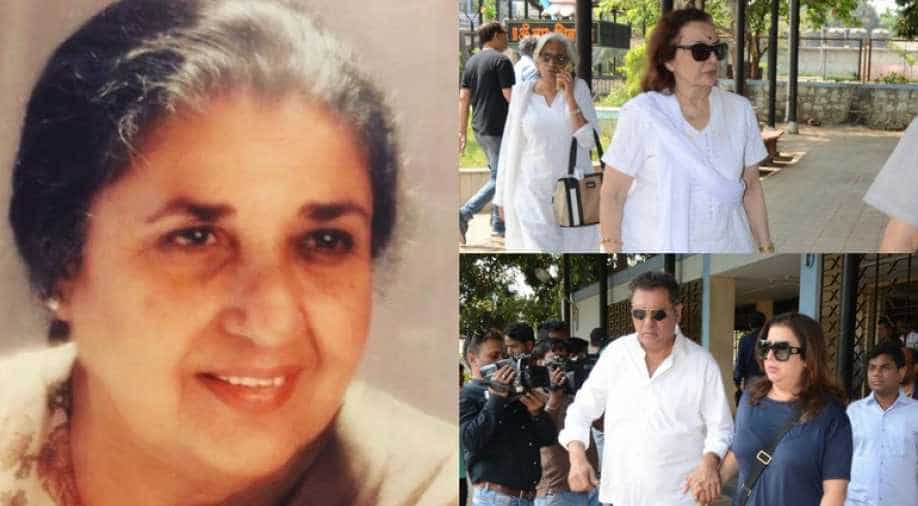 The veteran actress breathed her last on Tuesday. She was 89. Many film and TV celebrities attended her funeral. Photograph:( WION )

Actress Shammi, known for her roles in films and TV series, died on Tuesday morning after a prolonged illness. She was 89. Indian fashion designer Sandeep Khosla took to his Instagram profile to share the sad news.He wrote: "We will miss you, you will always remain special to us RIP Shammi aunty #1929 #2018 #loveyou #abujanisandeepkhosla #bestfriend #guide #family."

The funeral took place on Tuesday afternoon and was attended by many of the actress friends and colleagues from the film industry. Asha Parekh, Farida Jalal, Anju Mahendru were seen at the funeral along with Boman Irani, Farah Khan, Sandeep Khosla, Sushant Singh and Meher Vij.

It was designer Sandeep Khosla who first broke the news of Shammi's death. Seen here with the actress'son. Photo by Yogen Shah (WION)

Shammi was married to film producer-director Sultan Ahmed for seven years before they got divorced.

Many celebrities took to Twitter to mourn her death.

A great actress, always happy & smiling...Shammi ji will be missed...I was lucky enough to have worked with her in Eeshwar & she was a joy to be around...My condolences to her loved ones. pic.twitter.com/WsCyrGboOM

T 2735 - Prayers and fond remembrances for Shammi Aunty .. so dear to us as family .. lost to us today ..????
some early pictures as a young entrant to films .. and one with Nargis ji at an event ; Shammi Aunty's real name was also Nargis ! pic.twitter.com/pfgzd1Tff3

I will really miss you Shammi aunty… You always gave the warmest hugs and never failed to make everyone smile. So many memories, so much happiness, gone but not forgotten. Rest in peace. pic.twitter.com/0BxQSNQRIL

Some people are born to spread happiness & joy. Shammi ji was one of them. Warm, affectionate, funny, optimistic & a wonderful human being. Her permanent line to me was,” Don’t ever grow your hair.” And she will continue laughing. Will miss her. May God rest her soul in peace.???? pic.twitter.com/eyQfIe3O9L