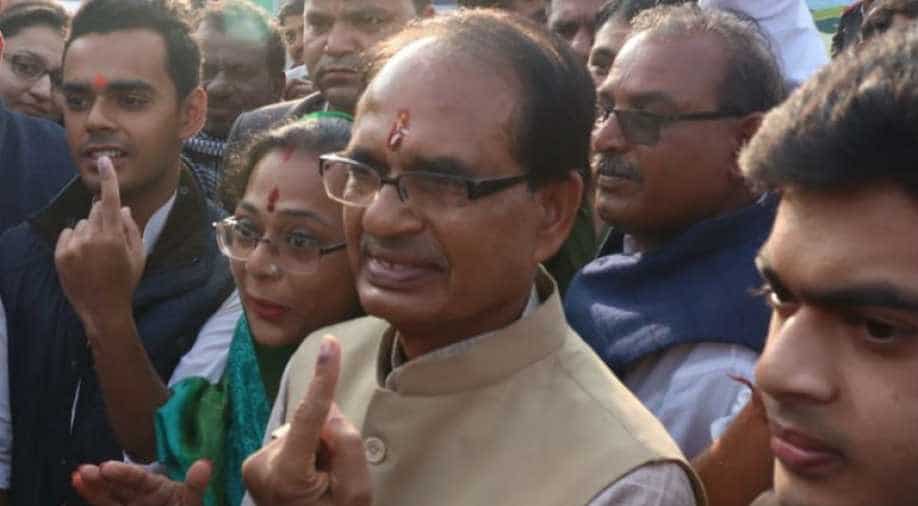 Shivraj Singh Chouhan along with his family after casting vote. Photograph:( Twitter )

Chouhan and his wife, Sadhna, urged all people to cast their votes in favour of the BJP if they want to continue seeing development in the state.

Incumbent Chief Minister Shivraj Singh Chouhan, accompanied by wife Sadhna Singh and his sons Kartikey and Kunal, cast their votes at a polling station in Budhni while expressing confidence in the party's victory in the ongoing assembly polls.

Speaking exclusively to ANI, Chouhan said that he has set a target of bagging 200 seats, for which lakhs of volunteers are working day and night.

"I am 100 per cent sure that BJP will come to power for the fourth time and will have absolute majority. We have set a target of 200 seats this time and lakhs of volunteers are working to achieve this goal.

Speaking about his Congress opponent Arun Yadav, Chouhan said that the party has done a "lot of injustice" to him.

"They (Congress) first removed him from the post of state unit president and then gave him a ticket from Budhni," he claimed.

Voting for 230 assembly seats has commenced in Madhya Pradesh today. In the view of polling, Chouhan and his wife, Sadhna, urged all people to cast their votes in favour of the BJP if they want to continue seeing development in the state.

While Chouhan's younger son, Kunal, refused to comment on any political aspect, he urged the youth to exercise their franchise in order to make their state developed.

Kartikey Chouhan, the elder son of the incumbent chief minister, also reiterated that the BJP will defeat all rival political quarters and win over 200 seats in the elections this time. "Last time, we three came for casting votes and won the elections. But this time, we four have come and I am confident that BJP will win for the fourth time," he added.

In Madhya Pradesh, voting, which began at 8am, will conclude at 5pm. However, the timing for polling in Baihar, Lanji and Parswada assembly constituencies of Balaghat district has been set from 7am to 3pm.

Around five crore eligible voters will decide the fate of 2,899 candidates contesting for 230 seats of the Madhya Pradesh Assembly.

Elaborate security arrangements have been made in order to ensure free, fair and peaceful polls. Around one lakh 80 thousand security personnel have been deployed to maintain law and order in the region.