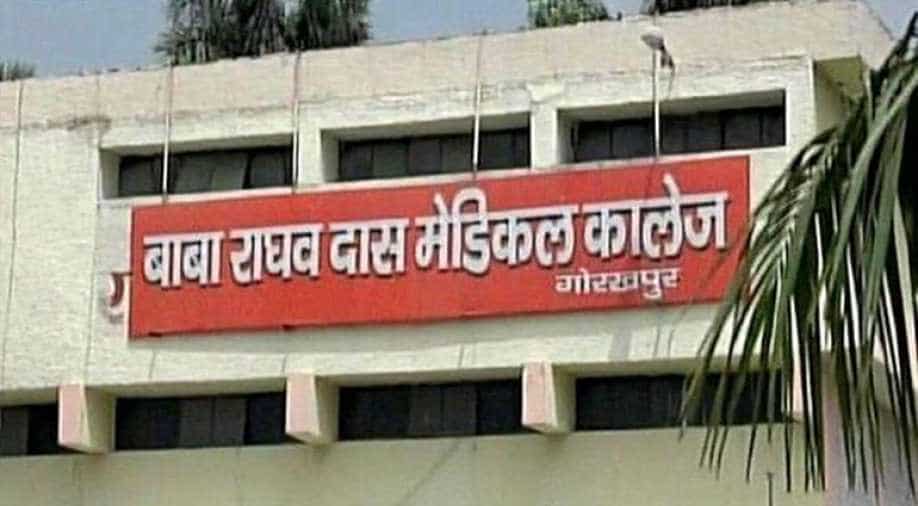 The BRD Medical College is already under scanner for deaths of over 70 infants at the Gorakhpur hospital in a week in July. Photograph:( ANI )

Thirty-six children reportedly died on August 27 and 28 in Gorakhpur's Baba Raghav Das (BRD) Medical College, barely a fortnight after over 70 infants died in a week in the same hospital.

The report cited a senior doctor at the hospital who sought anonymity.

A total of 290 children have died at the BRD Medical College between August 1 and August 28, the DNA report added.

About 1,250 children have so far died since January this year, which includes 175 deaths from encephalitis, hospital sources told DNA.

The infant deaths in July allegedly took place because of a lack of liquid oxygen in the hospital, invoking widespread criticism of the chief minister Yogi Adityanath government.

Earlier Tuesday, the suspended principal of the medical college, Rajiv Mishra, and his wife Purnima were arrested from Kanpur in connection with the deaths in July. They were taken to Gorakhpur by the Special Task Force (STF) of Uttar Pradesh police.

Uttar Pradesh Chief Minister Yogi Adityanath had ordered for a strict action against the hospital staff and Pushpa Sales Pvt Ltd, the firm that had allegedly cut off oxygen supply over non-payment of dues

Pushpa Sales is accused of breaching its responsibility for supplying oxygen despite being made aware of depleting stocks by the medical college staff, which invokes the section of criminal negligence.

The FIR (First Information Report) also states that the government hospital had received a total fund of Rs 454 lakh for the financial year 2017-18, of which Rs. 63.65 lakh was supposed to be given to Pushpa Sales in April.

Therefore, the BRD hospital personnel have been charged for "deliberately not submitting the payment despite repeated written request by the supplier to the principal" in want of bribe.

The FIR also accused the principal Misra of staying absent from office on August 10 when media reported the deaths, thus indicating a "criminal conspiracy" on his part.

It also accused Misra and his wife of corruption, supported by statements given by the hospital staff that she had obtained illegal amounts of money and had a significant role in her husband's corrupt activities.

Others have been accused of neglecting their duties in anticipation of bribe, that resulted in deaths.