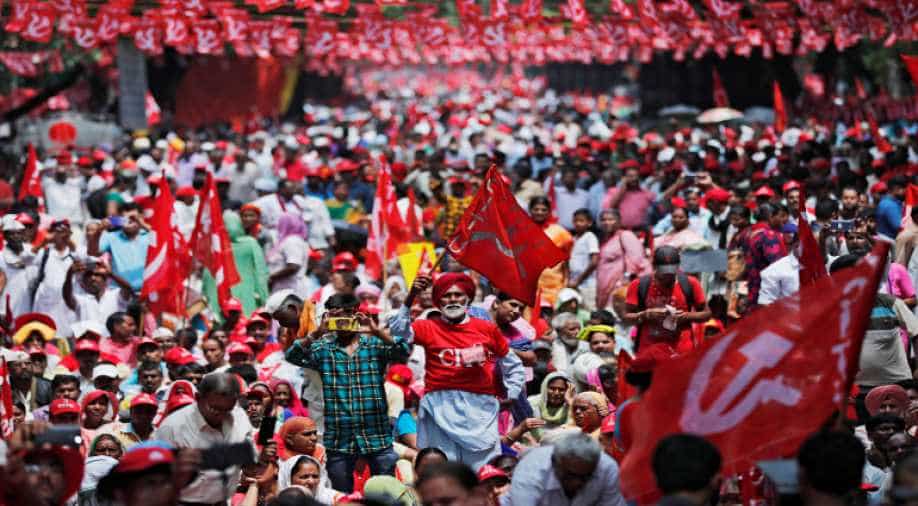 File photo of a farmers' protest in Delhi. Photograph:( Reuters )

'On November 30, the farmers will start their march from Ramlila ground to Parliament. At Parliament Street, farmer leaders will speak on agrarian issues and also, leaders of different political parties barring the BJP will address the gathering,' Hannan Mollah, a senior leader of the CPI-M, said.

Over one lakh farmers from across the country plan to assemble in the national capital on November 29 and 30 to participate in a mega march to protest against, what they have termed, the Centre's "failure" to address their issues.

A cultural programme 'Ek Sham Kisan Ke Naam' dedicated to farmers would be held at the Ramlila ground on the first day of the congregation, where prominent singers and poets would perform.

"On November 30, the farmers will start their march from Ramlila ground to Parliament. At Parliament Street, farmer leaders will speak on agrarian issues and also, leaders of different political parties barring the BJP will address the gathering," said Mollah, who is a senior leader of the CPI-M.

The rally has been organised to protest against the Centre's failure to address farmers' issues, he said, adding the government must come out clean on measures for them.

AIKSCC was formed under the aegis of AIKS and other left-affiliated farmers' bodies in June 2017, after struggles of farmers in different states like Maharashtra and Madhya Pradesh, for debt relief and remunerative prices.

"The bills were prepared after a series of discussion on farmers issues during the Kisan Mukti Sansad, which was held in November last year," said Mollah.

He added that CPI-M MP KK Ragesh, who is also the national joint secretary of AIKS, has introduced the bills in Rajya Sabha. Raju Shetty of Swabhimani Shetkari Saghtana presented these in Lok Sabha.

AIKSCC has demanded a special session of Parliament to adopt the two key bills of liberation from farm debt and fair assured prices to farmers and also to discuss the agrarian crisis and its related aspects.

Anjaan said rural India has been reeling under agrarian distress and for solving it, left parties and left-leaning organisations have been raising "democratic voices" across the country.

"To counter the agrarian distress, the first step of the government should be waiving farmers' loans. A National Debt Relief Commission for farmers has also to be set up," he said.

He added that the government should implement the recommendations of the Swaminathan Commission so as to provide the farming community a "big relief".