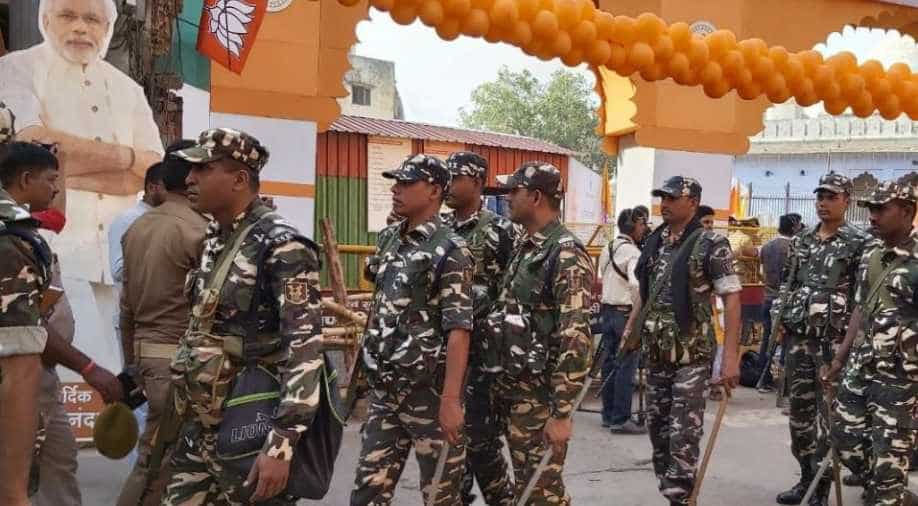 PM Modi's visit is nothing less than a festival for the people of his constituency. Dancers, musicians, and acrobats also took to the streets of the holy city to perform and keep the crowds waiting for Prime Minister entertained. Photograph:( ANI )

An LED screen has been installed at the entrance of Kashi Vishwanath Temple which will live stream visuals from inside when PM Modi offers prayers.

Pappu ki Adi, the famous tea stall in Varanasi, is bustling with chai lovers on Monday.

What makes the day more special is - Prime Minister Narendra Modi is coming to Varanasi, to the place whose voters sent him to Lok Sabha for the second consecutive time in the recently concluded general elections.

Chandra Prakash Jain, a local businessman who had come to get his daily cup of tea, said the whole of Varanasi was waiting eagerly for PM Modi and added that the constituency would ensure PM Modi's win for many more terms in the future.

"We welcome Prime Minister Modiji on his first visit to Varanasi post his win in the Lok Sabha polls. The whole of Varanasi is eager to see him and thank him for the developmental work he has carried out in Varanasi and the country. He will win from here again and will definitely win two or three times more," Jain told ANI here.

Sridhar Pandey, an astrologer from Ganga Ghat, said that PM Modi is a unique leader and his love for the people knows no bounds. Pandey said he had also conducted pujas for the Prime Minister on his earlier visits.

"It is unique that a leader is coming to thank the people after winning the elections. It shows he is a unique and compassionate leader who cares for the people. His unceasing, tireless work in the past five years has made people love him even more," the astrologer said.

"We know it takes time for development but we want him to finish all the good work he has started, especially the cleaning of Ganga. I have personally accompanied PM Modi when he did aarti at the Ganga ghat in his previous trips, he is a great person," Pandey told ANI.

Ram S Mishra, a local journalist, said that there was no doubt about PM Modi's capability but also implored him to take a closer look at the work being done in his constituency.

"Kashi had chosen its MP the last time but this time we have chosen the Prime Minister of the country. This is a great achievement for Varanasi and we thank Modiji for enhancing its image in the globe," he said.

"We also want him to monitor and assess the development work in his second term as the MP from this constituency and ensure better use of funds. Kashi thanks PM Modi and will be with him always," said Mishra.

There is energy and excitement in Varanasi, a sentiment summed up in a few lines by Manoj, the son of the iconic Pappu tea stall's owner who is managing the shop since the morning."We will wholeheartedly welcome PM Modi for his rally, he has done great work in the constituency and will do much more in the future. We have full faith in him and his commitment," Manoj said.

Visuals of security from Varanasi ahead of PM Narendra Modi's visit today. An LED screen has been installed at the entrance of Kashi Vishwanath Temple (pic 4) which will live stream visuals from inside when PM Modi will offer prayers. pic.twitter.com/VObjmcgJ5E

The preparations for Modi's welcome have been completed and the area has been decked up with BJP flags, ribbons and wall paintings of Buddha and other spiritual idols.

Cleaning and maintenance work in the area has also been completed.

An LED screen has been installed at the entrance of Kashi Vishwanath Temple which will live stream visuals from inside when PM Modi offers prayers.

Modi's visit is nothing less than a festival for the people of his constituency. Dancers, musicians, and acrobats also took to the streets of the holy city to perform and keep the crowds waiting for Prime Minister entertained.