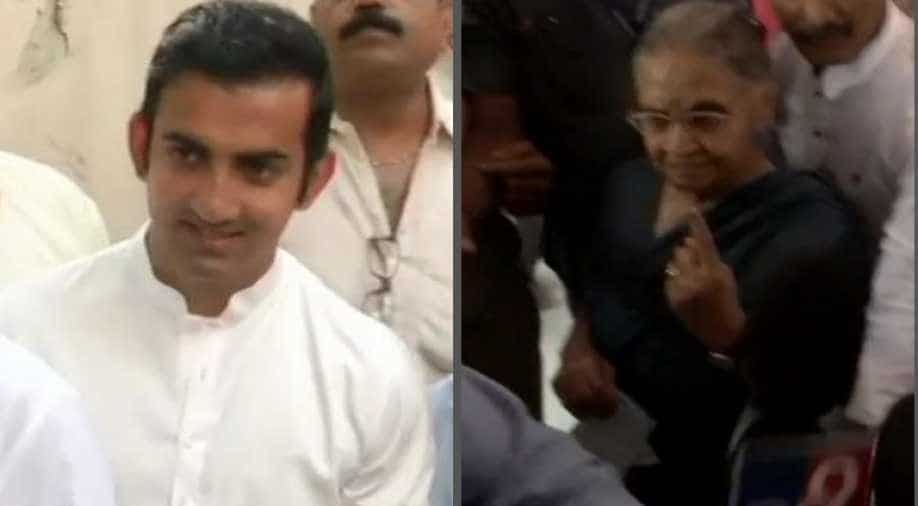 Gautam Gambhir and Sheila Dikshit cast their votes in Delhi during the 6th phase of Lok Sabha polls 2019. Photograph:( ANI )

Voters queued up outside polling booths on Sunday morning in all seven Lok Sabha constituencies of the national capital where former Delhi chief minister Sheila Dikshit, Union Minister Harsh Vardhan and cricketer-turned-politician Gautam Gambhir are among those in the fray.

"Dear @ECISVEEP Evm of polling booth no 27 AC 29 Delhi west is not working since morning, Do the needful asap," he wrote on the micro-blogging site.

Over 1.43 crore people in Delhi are eligible to vote in this election which will decide the fate of 164 candidates, of which 18 are women. There are 43 independent candidates.

"India's prestige in the world, in whose hands is the country safe and who can bring rapid development -- these are issues weighing on voters minds. And, they will vote on these issues only," Ram Lal claimed.

Interacting with reporter after casting his vote, he said, a "strong and stable government is needed, people also feel".

Asked if the BJP will be back with a full majority, he said, "BJP (organisation) is based on team.. It will be a strong situation."

As many as 523 polling locations have been identified as critical and 60,000 personnel, including those of the Delhi Police, Home Guards and paramilitary, will be on their toes to ensure there is no untoward incident.