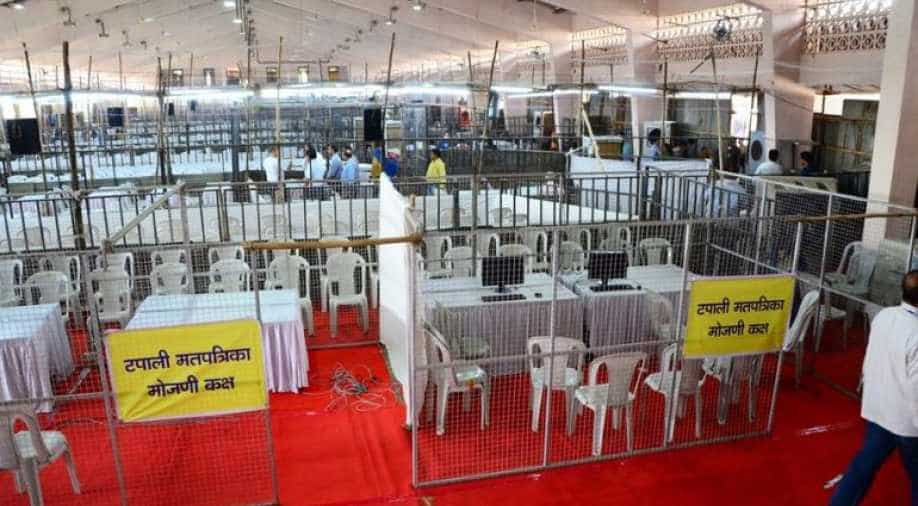 A total of 98,430 electronic voting machines (EVMs) were used for the four-phase polls in the state where counting is taking place at 48 counting centres in 38 locations from 8 am, an election official said.

Counting of votes began Thursday for 48 Lok Sabha seats in Maharashtra where trends are likely to start coming in by afternoon while the final results are expected in the evening, officials said.

A total of 98,430 electronic voting machines (EVMs) were used for the four-phase polls in the state where counting is taking place at 48 counting centres in 38 locations from 8 am, an election official said.

"The trends are likely to start coming in by afternoon and results by 4 pm," he said. See live updates: BJP-led NDA leads in early trends

Over a lakh polling staff and around 50,000 police personnel have been deployed in the state, the official said.

Maharashtra, which has the second highest number of 48 Lok Sabha seats in the country after Uttar Pradesh's 80, went to polls in four phases on April 11, 18, 23 and 29 and a total of 867 candidates were in the fray.

According to officials, maximum counting rounds of 35 each will be held in Palghar and Bhiwandi seats, followed by 33 in Bhandara-Gondiya and Thane, and 32 in Beed and Shirur.

Hatkanangale will have the lowest 17 rounds of counting while there will be 18 rounds each in Amravati and Sangli, they said.

"Counting personnel will randomly select five EVMs from each Assembly segment for VVPAT (voter-verified paper audit trail) checking. If a candidate demands a particular EVM be chosen, it will be done and one of the voting machines randomly chosen will be dropped," the official said.

Information and trends would be uploaded on the website ceo.Maharashtra.Gov.In and would also be available on toll-free number 1950, he said, adding a control room was set up at the state secretariat for the media.

"Several digital hoardings have been set up at the state secretariat in Mumbai. For the first time, the election trends and results will be seen on digital signboards of the traffic police department. At the district level, the information will be provided after every round of counting," he said.

Counting of votes for six parliamentary constituencies in the city is being held at the NESCO Complex in Goregaon, Udayanchal School in Vikhroli and New Sewree Warehouse in Sewree East.

Strict security arrangements have been put in place in other parts of Maharashtra for the counting day, a police official said.