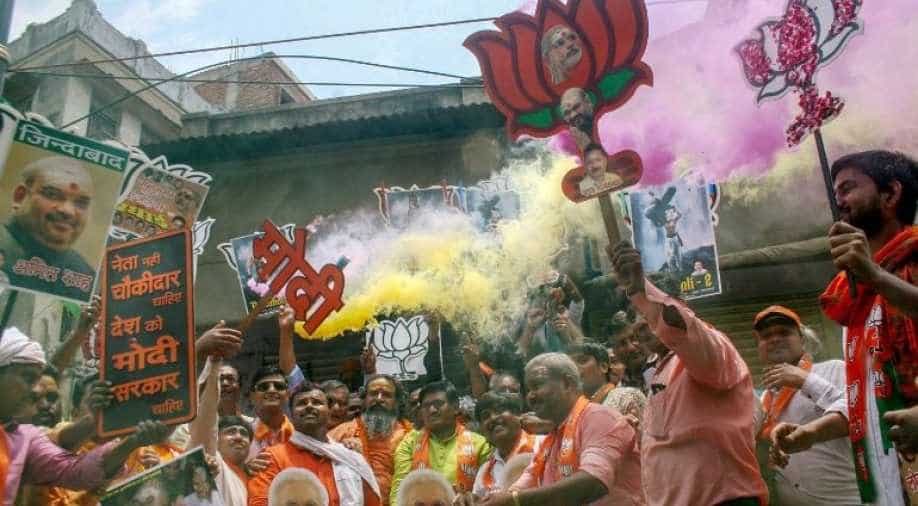 Certain of clinching all the seven seats in the national capital, the BJP continued to dominate the trends with two of its candidates taking the lead by a margin of over 3.40 lakh votes while the Congress and AAP trailed at the second spot in five and two constituencies respectively.

The BJP already went into a celebratory mode with jubilant supporters of the saffron party starting to burst crackers and shouting slogans at various counting centres.

BJP's incumbent MP from West Delhi Parvesh Verma was leading with a maximum margin of over 3.49 lakh votes while Congress's Mahabal Mishra was at the second spot. Verma had won from the constituency in 2014 with a record margin of over 2.68 lakh votes, the highest in the national capital ever.

Singer-turned-politician Hans Raj Hans followed him with a margin of over 3.40 lakh votes in the Northwest Delhi constituency where he is pitted against AAP's Gugan Singh, who is on the second position and Congress' Rajesh Lilothia at the third spot.

Delhi BJP chief Manoj Tiwari, who contested from the Northeast Delhi constituency against Congress veteran and former chief minister Sheila Dikshit and AAP's Dilip Pandey, was leading with a margin of over 2.99 lakh votes.

Tiwari said they (BJP) were sure of victory but did not expect such a "huge" margin.

"We were confident of the victory but were not expecting this kind of huge margin. I am indebted to the voters for imposing their faith in us.

"The kind of treatment that AAP has meted out to me always, the public has always observed it and voted accordingly. We have crossed the first hurdle in Delhi and will now gear up for the second one in February (Assembly elections)," Tiwari told reporters.

Cricketer-turned-politician Gautam Gambhir, who is making his electoral debut from East Delhi constituency, was leading by a margin over 2.38 lakh votes. Gambhir is locked in a contest with Congress' Arvinder Singh Lovely and AAP's Atishi.

Incumbent MP from New Delhi Meenakshi Lekhi was also ahead of Congress' Ajay Maken by a margin of over 1.98 lakh votes.

South Delhi's incumbent MP Ramesh Bidhuri was leading with a margin of over 2.26 lakh votes on the seat with AAP's Raghav Chadha on the second spot.

Chandni Chowk was the only seat where BJP candidate's margin was less than a lakh at 64,659 votes. Union Minister Harsh Vardhan is locked in a close fight with Congress veteran Jai Prakash Agarwal from the constituency.

Counting is underway for seven Lok Sabha seats in the national capital.

"The counting is going on smoothly in all the seven counting centres. Till now we have not received any complaints or any information of disturbance at the counting centres. Also the law and order situation is normal in the city," Delhi Chief Electoral Officer Ranbir Singh said.