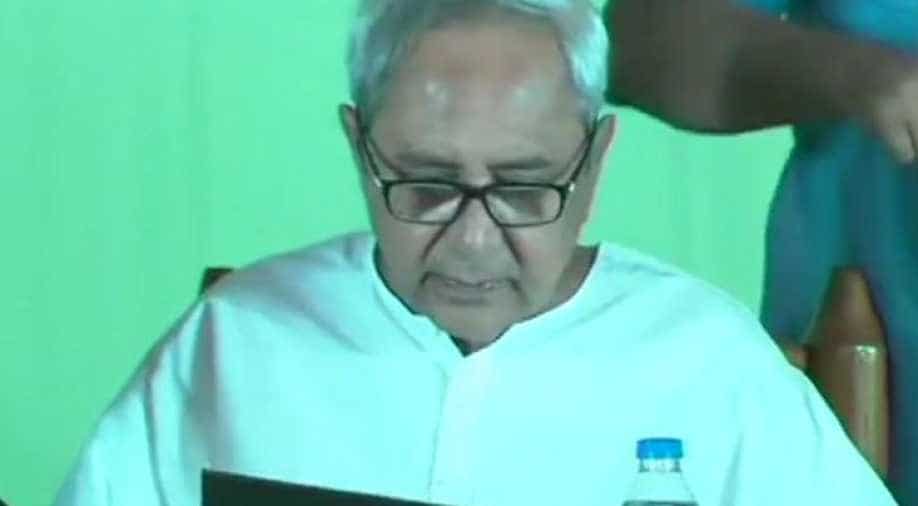 Patnaik's BJD stormed into power in the state Assembly polls bagging 112 of the 147 seats.  Photograph:( ANI )

The swearing-in ceremony took place at the Exhibition Ground in Bhubaneswar.

Biju Janata Dal chief Naveen Patnaik on Wednesday took oath as Odisha's Chief Minister for the fifth consecutive term. Along with him, a 20-member Council of Ministers were also sworn in.

The swearing-in ceremony took place at the Exhibition Ground in Bhubaneswar.

Patnaik's BJD stormed into power in the state Assembly polls bagging 112 of the 147 seats.

On Sunday, Odisha Governor Ganeshi Lal had Patnaik to form the next government in the state.

The Governor appointed 11 Cabinet ministers and nine Ministers of State on the recommendation of the chief minister.

PM Narendra Modi: Congratulations to Naveen Patnaik ji on taking oath as Odisha’s Chief Minister. Best wishes to him and his team in fulfilling the people’s aspirations. I assure complete cooperation from the Centre in working for Odisha’s progress. (file pic) pic.twitter.com/KCiD4D2dIN

Patnaik, the son of former chief minister Biju Patnaik formed the BJD after quitting the Janata Dal in 1997. He became the chief minister for the first time in the year 2000 and his party had been in alliance with the BJP till 2009.

Patnaik was hailed by Prime Minister Narendra Modi for his crisis management skills when Cyclone Fani ravaged the state. The PM had said that a mass tragedy could be averted only because the state government worked in tandem with the instructions issued by the Centre and implemented it on the ground.