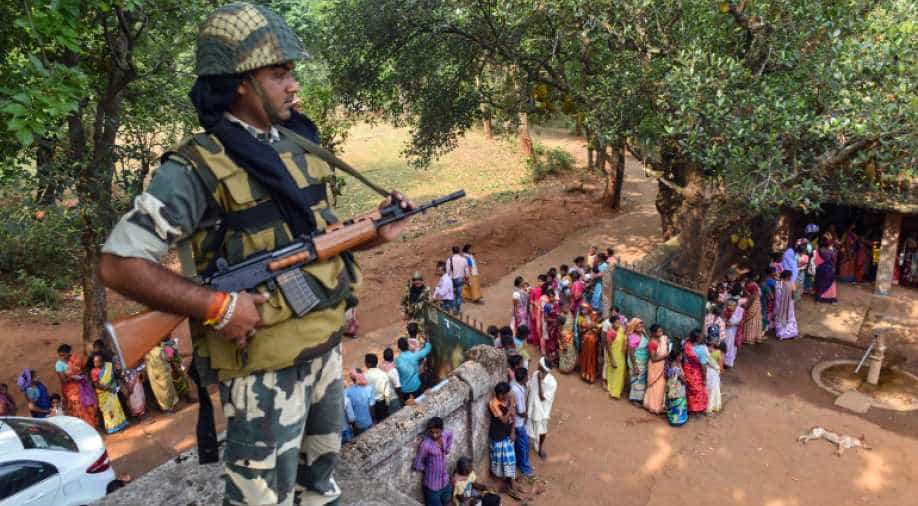 A security jawan stands guard as voters wait to cast their votes at a polling station, during the sixth phase of the 2019 Lok Sabha elections, at Chaibasa in West Singhbhum district. Photograph:( PTI )

If the elections in 2019 were to be conducted on a single day, the effective requirement would be for over 10 lakh personnel.

As many as 20 lakh security personnel were deployed in the seven-phase Lok Sabha polls, rendering the exercise bigger than India's well known 'Operation Brasstacks' in the 1980s, which was larger than any NATO exercise since World War-II, officials said Monday.

The 'Operation Brasstacks' was a major military exercise of the Indian Army in Rajasthan. It took place in 1986 until its execution in 1987.

"Effectively, nearly 20 lakh personnel of the police and central paramilitary personnel were involved during the elections. The mobilisation of such a large scale is rare anywhere in the world. In fact, India's best known Army exercise 'Operation Brasstacks' (1986-87), where nearly 6-8 lakh personnel were said to have been involved, itself was bigger than any NATO exercise since World War-II," a Home Ministry official said.

The extent of mobilisation of the security forces has also been massive with nearly 25 per cent of the overall strength of central paramilitary forces being deployed for elections this year, indicating the involvement of over three lakh paramilitary personnel.

However, since these officials are redeployed at various locations in different phases, the effective deployment is almost 2.35 times the number of troops actually involved.

Thus, if the elections in 2019 were to be conducted on a single day, the effective requirement would be for over 10 lakh personnel. Similarly, in the 2014 general election, the actual and effective deployments were of the order of 2.5 lakh and 6 lakh, respectively.

In addition to the paramilitary forces and state armed battalions, extensive participation of police personnel belonging to civil police and district armed reserve, along with home guards and special police officers in various capacities, have also been seen.

Even if the participation is taken at 50 per cent of actual strength, this would mean the involvement of nearly 8-10 lakh additional personnel, the official said.

Apart from the mammoth size of election-related mobilisation, the duration is also considerable. This year's general elections were conducted over a period of nearly 40 days (April 11 to May 19) with the counting of votes scheduled to take place on May 23.

Timely mobilisation of nearly 20 lakh personnel within 40 to 45 days is a humongous task. A well thought planning with the Indian Railways, state and various forces play a crucial role in completing the requirement of the Election Commission, another official said.

More than 150 special trains were utilised for mobilisation of troops. These troops criss-cross the length and breadth of the country to meet the requirement of the respective state, the official said.

The core duties of the paramilitary personnel deployed for election duty include instilling a sense of confidence and security among people to exercise their franchise freely without any fear.

The Election Commission, in coordination with the Home Ministry, which has the administrative control over the central paramilitary forces, has made an assessment of all aspects having bearing on the election process, including the state-wise and phase-wise requirement of security forces, the official said.

The ministry prepared a deployment plan of various forces like the CRPF, BSF, CISF, ITBP, SSB and the Assam Rifles keeping in view their role in border guarding, counter-insurgency operations and other commitments.