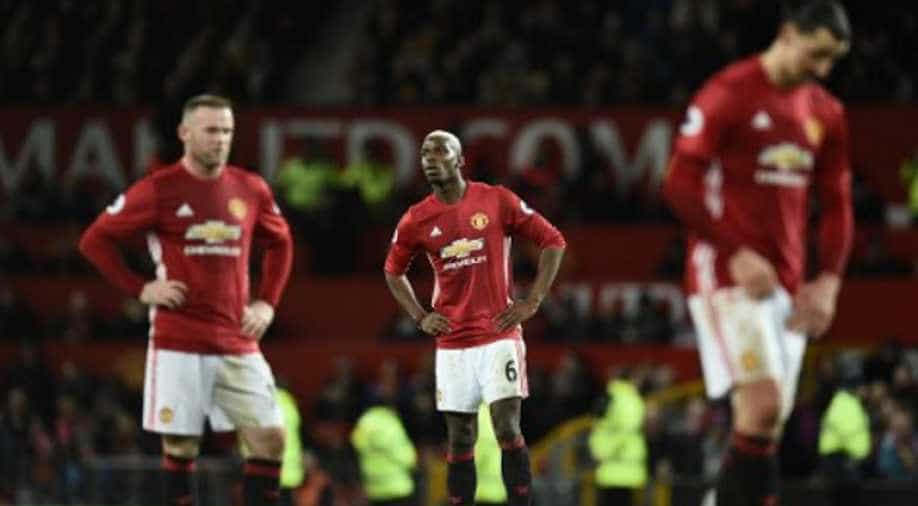 Manchester United sniffed a chance early on when David Meyler presented possession to Paul Pogba and the midfielder angled a clever pass into the path of Henrikh Mkhitaryan. Photograph:( AFP )

Manchester United`s push for the Champions League places was frustrated by Hull City as Jose Mourinho`s men were held to a 0-0 draw at Old Trafford on Wednesday.

With Manchester City winning handsomely at West Ham United, their cross-city rivals lost ground in the race for a top-four finish as Hull`s stubborn defending kept them at bay.

The visitors, who showed further signs of improvement under new manager Marco Silva, restricted Mourinho`s side to few clear chances.

And when United did get a sight of goal they were thwarted by Hull goalkeeper Eldin Jakupovic, who made some smart saves either side of half-time.

There was more bad news for Mourinho when defender Phil Jones limped off injured in the second half.

It might have got even worse, but Lazar Markovic struck the United woodwork late on with the best chance of the game.

United sniffed a chance early on when David Meyler presented possession to Paul Pogba and the midfielder angled a clever pass into the path of Henrikh Mkhitaryan.

But the winger`s chances of finding a shot were halted by full-back Andrew Robertson, who covered around to make an important challenge.

Zlatan Ibrahimovic almost put United ahead in the 15th minute with a moment of characteristic confidence, brushing off Tom Huddlestone and hitting a curling shot that was tipped around the post by Jakupovic.

But despite dominating possession, United were finding it difficult to break down the stubborn resistance of Hull, with Mkhitaryan in particular having little success in running at defenders.

Another chance arrived for United 10 minutes before half-time when Pogba helped a pass by Daley Blind into the feet of Ibrahimovic.

However, the Swede was closed down quickly and he snatched at a left-foot shot that flew harmlessly wide.

After lacking the magic to change the game for much of the first half, the home side nearly opened the scoring with a goal of real inspiration three minutes before half-time.Michael Carrick`s pass was flicked on superbly by Ibrahimovic for Pogba, whose powerful effort was saved well by Jakupovic.

Pogba and Ibrahimovic combined again nine minutes into the second half when the former lofted a clever pass into the latter`s path inside the 18-yard box.

But it was a difficult ball for Ibrahimovic to control and his attempted shot was easy for Jakupovic to claim.

Another raking, diagonal ball by Pogba released Marcus Rashford moments later and this time it was brought under control.
The young forward managed to get a shot away but it went just wide of the target.

Then a cross from the right by Antonio Valencia was helped back across goal by Rashford, but substitute Wayne Rooney failed to connect with a shot on the turn and when Ibrahimovic did make contact, he fired wide.

Hull striker Oumar Niasse was fortunate to stay on the field with 25 minutes remaining when, having already been booked, he committed a high challenge on Blind but escaped without another caution.

The home side ought to have led with 13 minutes remaining, but Jakupovic again came to Hull`s rescue.

He made a superb block on the line to deny substitute Juan Mata from close range after Chris Smalling had headed Ander
Herrera`s cross into the Spaniard`s feet.

With 10 minutes remaining Hull`s players were furious with Ibrahimovic when he hung out a leg in the penalty area and waited for contact from Huddlestone before going to ground.

Referee Mike Jones was unimpressed and awarded a free-kick to the visitors.

United were frustrated again in stoppage time when Jakupovic saved a header by Marcos Rojo and then turned away a curling shot from Pogba.