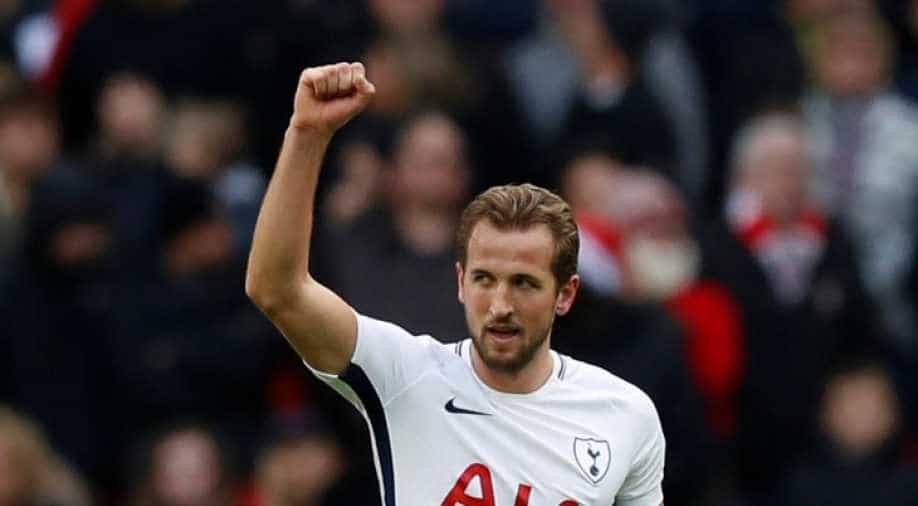 There was no doubt who the spotlight was on though as England striker Kane eclipsed Alan Shearer's record 36 Premier League goals in a calendar year, taking his tally to 39 in 2017. Photograph:( Reuters )

Tottenham Hotspur's Harry Kane became Europe's most lethal marksman of 2017 with a second hat-trick in four days to break a 22-year-old Premier League record as his side thumped Southampton 5-2 on Tuesday.

Another young England striker was also among the goals as Jesse Lingard struck twice, the second in stoppage time, as Manchester United hit back from two goals down to draw 2-2 with Burnley and deny the visitors a first win at Old Trafford since 1962.

Second-placed United's second consecutive 2-2 draw left them 12 points behind runaway leaders Manchester City, who play Newcastle United on Wednesday. United's result allowed Chelsea to close to within a point of Jose Mourinho's side with a laboured 2-0 home win over Brighton and Hove Albion.

There was no doubt who the spotlight was on though as England striker Kane eclipsed Alan Shearer's record 36 Premier League goals in a calendar year, taking his tally to 39 in 2017.

He is also the Premier League's leading scorer this season with 18, having won the Golden Boot for the past two seasons.

Two close-range efforts and a superb dinked finish from fellow goalscorer Dele Alli's pass took his tally in all competitions in the calendar year for club and country to 56, lifting him ahead of Lionel Messi who hit 54 for Barcelona and Argentina in the past 12 months.

Kane is the first player apart from Cristiano Ronaldo and Messi to finish the year as top scorer in Europe since 2009.

"I'm very proud of it. Messi and Ronaldo have dominated football for so long, they're two of the world's greatest players ever," Kane said.

"I said to the lads before the game to try and set me up and they all did that, so I'll have to take them out to dinner or something."

With runaway leaders Manchester City not in action it was a chance for United to close the gap to 10 points but they ended the day 12 behind as Burnley came close to a shock.

Mourinho put Lingard on in the second half in place of Zlatan Ibrahimovic and, after missing a sitter, he reduced the arrears with a back-heel flick. Burnley hung on desperately but Lingard drove home the equaliser in stoppage time.

Chelsea were uninspired at Stamford Bridge but Alvaro Morata and Spanish compatriot Marcos Alonso scored after the break to earn the win and move Chelsea to 42 points from 20 games.

Liverpool have 38 with Tottenham on 37 and Arsenal, who play at Crystal Palace on Thursday, on 34.

A fierce relegation battle on the south coast led to Bournemouth snatching a point at the death with a 3-3 draw against West Ham United - Callum Wilson's controversial goal denying the visitors a victory.

Wilson's effort, after Marko Arnautovic's two late goals had turned the game on its head to give West Ham a 3-2 lead, was initially disallowed for offside but was deemed legal by referee Bobby Madley.

"The mistake was the referee went to the linesman. He knows he made a mistake, but we all make mistakes," Arnautovic said.

The result left Bournemouth third from bottom, a point and a place below West Ham.

Watford snapped a four-game losing streak as they came back to beat Leicester City 2-1 thanks to an own goal by Leicester keeper Kasper Schmeichel.

Huddersfield drew 1-1 at home to Stoke City and second-bottom West Bromwich Albion did little to ease their relegation fears with a 0-0 draw at home to Everton.