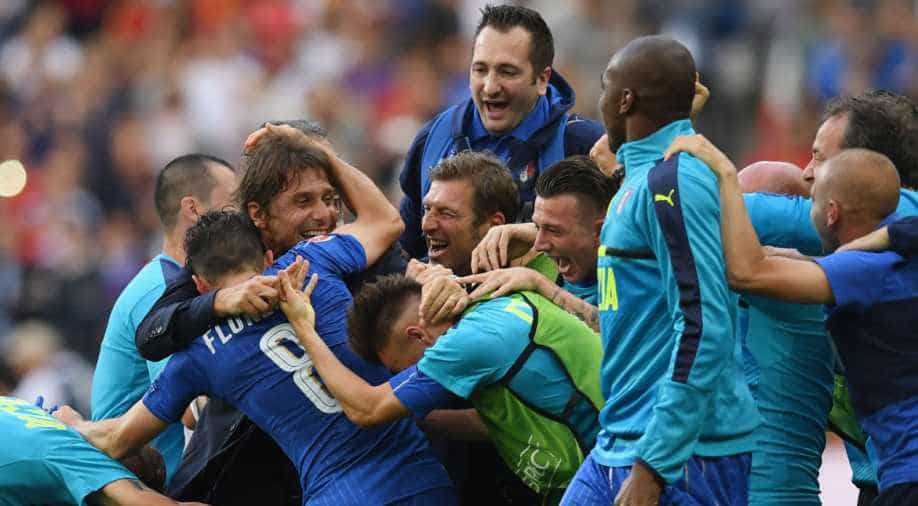 Conte celebrates his team's 2-0 win with his players and staff after the UEFA Euro 2016 round of 16 match between Italy and Spain at Stade de France on June 27, 2016. Photograph:( Getty )

Follow Us
Without the star names that have graced Italy sides in the past, coach Antonio Conte says the secret to their success at Euro 2016 has been to shun the mentality of a national team and behave like a club.

Italy came into the European Championship with an ageing squad shorn of standout talents and with few tipping them for success.

Their tournament performances, however, have confounded expectations and a 2-0 victory over Spain on Monday propelled them into the quarter-finals, where they will face Germany in Bordeaux on Saturday.

For Conte, who has a notorious emphasis on the team ethic and industry over individuality, the way to achieve success is to mould the national team around the model of a club, where a well-drilled tactical system can stifle even the best opponents.

"I've always said, right from the start of my work here with the national team, that the only road we can follow if we want a bit of success is to be like a club, to be like a team that play together every week - we cannot allow ourselves to be a selection," Conte told reporters following the victory over Spain at the Stade de France.

"I'm happy above all for the players. It's more than a month that we've been working tactically, technically, mentally and we've been trying to surprise everybody and I think we've succeeded to some extent."

Spain were comprehensively snuffed out, barely posing a threat until the closing stages of the game.

Conte feels next opponents Germany, however, could pose a greater challenge.

The world champions cruised through the group stage and thumped Slovakia 3-0 to reach the last eight.

"We now face the best side at the European Championship next Saturday," Conte said. "It's going to be very, very hard in all aspects. We've got to do well to recover and prepare for Germany the best way we can. We are without Thiago Motta (suspended) and that's a big blow, also because (Daniele) De Rossi took a knock to his hip. But we know that in adversity, we give that little bit more."