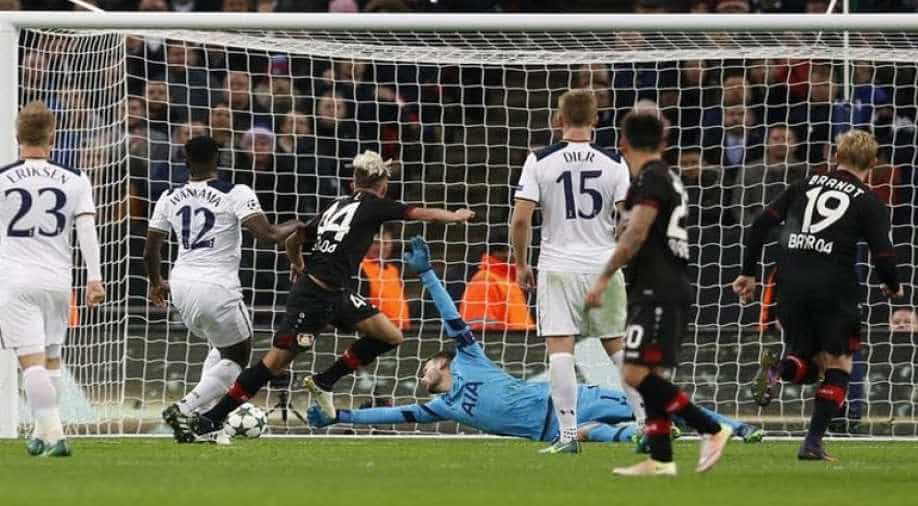 Tottenham Hotspur stumbled at their adopted Wembley home again as Kevin Kampl's second-half goal gave Bayer Leverkusen a 1-0 victory that put the Bundesliga side on course for the last 16 of the Champions League on Wednesday.

Slovenian international Kampl's close-range effort after 65 minutes gave Leverkusen a deserved victory — their first on English soil in 10 attempts — to move them above Tottenham into second place in Group E.

Tottenham, now without a win in six matches in all competitions, never settled and there was precious little for the majority of the record 85,512 crowd to get excited about.

Eric Dier came close to an equaliser when his free kick thumped against the crossbar with eight minutes left but Tottenham left the field to boos after a repeat of their opening 2-1 defeat by Monaco.

With two matches left, Monaco lead the group on eight points after beating CSKA Moscow 3-0. Leverkusen have six and Tottenham have it all to do with four.

"If we don't win in Monaco and then against CSKA it's goodbye to the Champions League," Tottenham manager Mauricio Pochettino, whose side face north London rivals Arsenal in the Premier League on Sunday, told reporters.

"Two games at Wembley we have been very poor."

Tottenham's season has hit a wall since an impressive win over Manchester City last month and they began in edgy fashion against a Leverkusen side who sensed their hosts' unease.

With their White Hart Lane ground affected by building work on a new stadium, Tottenham opted to play their home Champions League games at Wembley. But the grandeur of the venue has not had the desired effect on their form.

Pochettino looked far from happy as his side continually gave the ball away in dangerous areas in the first half.

Former Manchester United striker Javier Hernandez buzzed around dangerously and should have punished a Kyle Walker error shortly before halftime but his shot was deflected wide.

Tottenham took half an hour to register a worthwhile effort on goal, Christian Eriksen's powerful shot beaten away by Bernd Leno.

Dele Alli did have the ball in the net on the stroke of halftime after substitute Vincent Jansen's shot was saved by Leno, but Jansen had been penalised for pulling.

Alli had a strong penalty appeal turned down when tumbling over Leverkusen skipper Omer Toprak's dangled foot early in the second half and Walker sliced through the Leverkusen defence and fired a shot agonisingly wide.

Moments later, more shoddy Tottenham defending let in Hernandez whose first shot was blocked and as the ball came back to him he forced Hugo Lloris into a smart save.

Tottenham failed to heed the warnings, however, and fell behind in the 65th minute. Charles Aranguiz's shot deflected into the path of Kampl who slotted past Lloris from six yards out.

Leverkusen cleverly kept Tottenham at arm's length thereafter although they did enjoy a let off when Dier's free kick rocked the crossbar and the ball was scrambled clear.

"We were courageous and bold," Leverkusen coach Roger Schmidt, whose side had drawn their previous three matches in the group, said.

"Tottenham are unbeaten in the Premier League so that makes it more special."