'Weathering With You' review: Makoto Shinkai's film is a beautiful love story about climate change 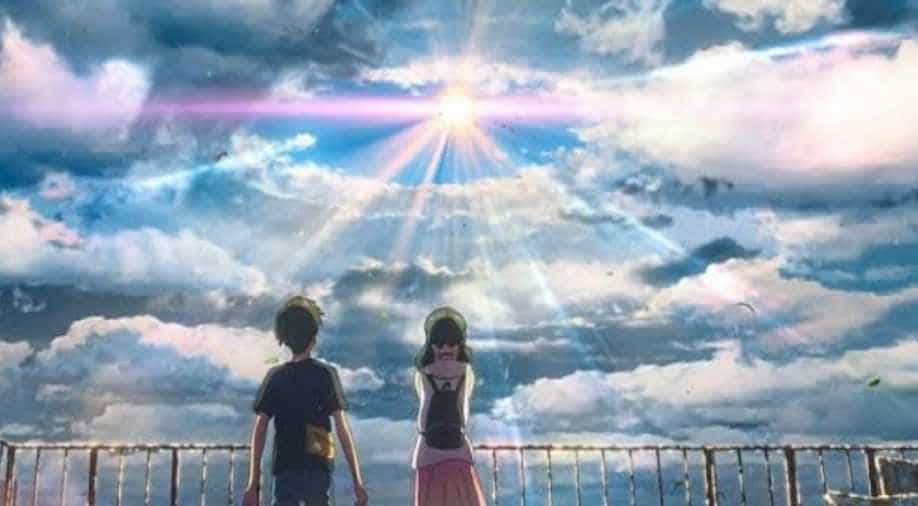 The film captures varied emotions through two teenagers, a boy and a girl that fall in love amidst the backdrop of an existential threat posed by volatile weather as torrential rains lash the city of Tokyo for unending days.

Touring around the world as part of several film festivals, Japanese animation film ‘Weathering With You’ has now landed in India. Directed by Makoto Shinkai, the film found many takers in the audience on the first day of the Japanese Film Festival in New Delhi as it got swarmed by hundreds that turned up to watch the superhit film that deals with complex issues of love, relationship, climate change and superstition. The director spoke to WION about his film getting an Oscars nod, watching Baahubali and his love for movie-theatre culture.

'Weathering With You' captures varied emotions through anime characters; primarily two teenagers, a boy and a girl that fall in love amidst the backdrop of an existential threat posed by volatile weather as torrential rains lash the city of Tokyo for unending days. It’s almost beautiful how Makoto places the idea of climate change and its absolute result in terms of all low-lying areas getting submerged by water in case of persistent rainfall, a possibility that most religious beliefs around the world, as well as scientists, now predict with the rise in global temperature.

Makoto also hints at the idea of the sky and its clouds being a fully functional habitat for some other-worldly organisms, like transparent fishes that are made of rainwater. In the film, the line ‘sky is an ecosystem like a lake’ projects the idea of a parallel world we fantasise the existence of so much. Only in this, the sky is proposed to be more intimately connected with human beings, more than any hardcore environmentalist would argue.

The narrative from the start is such that there is a huge role played by superstitions or local beliefs, like that of a sunshine girl or weather girl who can control the weather. The film starts with an inlet into the life of a Tokyo girl named Amano Hina whose mother is on the deathbed as the city is drenched in a deluge. When she looks outside the hospital room, her eyes follow a sharp ray of sunlight that falls on the rooftop of a building. Racing over to the top, praying for her future, she passes over to the Torii gate (that is considered sacred, the passage to heaven) and finds herself being spirited away into a world of clouds as bodies of transparent fish swim next to her.

Meanwhile, there is a 16-year-old runaway boy named Morishima Hodaka who reaches Tokyo with some money and bumps into a man who happens to give him a meagre paying job but a place to live and meals, something that interests the boy.

The boy and girl meet a few times as strangers before they become friends and subsequently fall in love without realising it so much but what does not help their case is the downpour that has made Tokyo come to a standstill. The film picks up from here when Hina realises that she is indeed a weather girl and can control the weather with a prayer to the Gods above.

They start helping people only to realise that the weather girl pays a price for changing the weather as she loses a bit of herself every time she prays. The film, in its moments, makes one teary-eyed when Hina gives a going-to-wed couple a burst of bright sunshine or a widow a clear sky so that she can burn incense and guide her late lover’s spirit home.

As their love blossoms, the teen couple face several challenges in the form of the price that the weather girl has to pay or the runaway boy being sought by the police as there is a missing person’s alert filed by his family. ‘Weathering With You’ is a story of love and compassion as Hina and Hodaka explore Tokyo and us through their eyes.

Makoto pays special emphasis on how Tokyo is shown in his film as he paints a vivid picture with colours. The film shows the Japanese city in all its glory with the sun shining bright on its skyscrapers as the people go about their daily lives -- getting on the metro rail, going to work, eating and sleeping like any other metropolitan city.

The music too, like the director has pointed out previously in his interviews, is a major highlight of the film as it flows with the story and its pace.

‘Weathering With You’ released in Japan in 2018 and has since been the talk of the town with it becoming one of the highest-grossing animated films of Japan ever. The film is now Japan’s official entry for Oscars 2020 in the International Feature Film category.