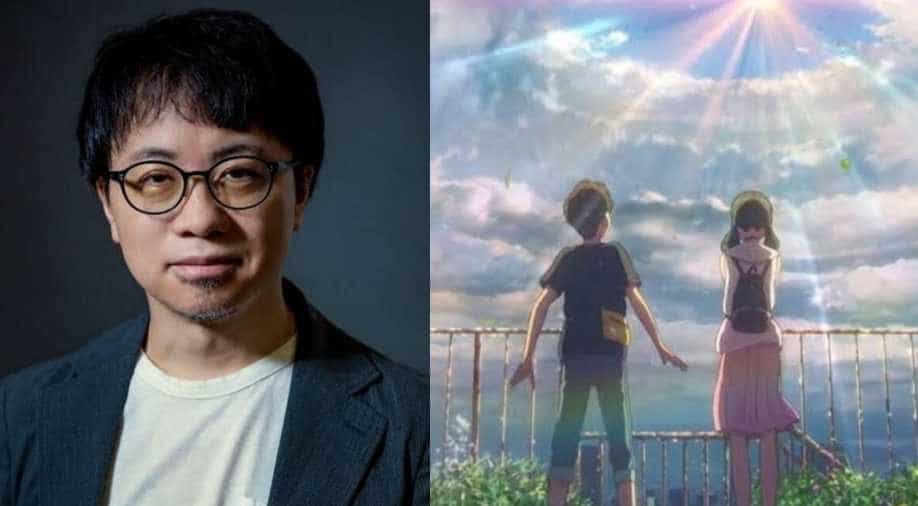 Filmmaker Makoto Shinkai with the poster of his film 'Weathering With You' Photograph:( Twitter )

It took more than 50,000 people to bring the Japanese superhit film ‘Weathering With You’ to India. An online campaign called the Indian Anime Movement took shape in April this year to bring the anime movie culture to India. Cut to now, ‘Weathering With You’ was first screened in India at the third edition of the Japanese Film Festival that kickstarted on September 27 in New Delhi as its director Makoto Shinkai came seeking a response to his film that is a massive hit back home and is the tenth-highest earning Japanese film of all time.

The film shows unadulterated romance between two teenagers that deal with a set of challenges as climate change threatens their city in its current form.

Discussing the massive popularity of anime films, Oscars nomination, music in Japanese movies and love for movie theatres in the age of streaming platforms, Makoto Shinkai got candid talking to WION.

WION: How different is it to direct a regular feature vs an animation film?

Makoto: Both start with a script but animation diverges when the concept of storyboard comes into play as it is much stronger in an animation film. Even though a feature film has a storyboard but you really deep dive into it in an animation film. When you have a storyboard in place, it is a barebone design of the movie and based on that you divide it amongst hundreds of illustrators. They work on it scene by scene to create something that is brought together.

WION: Why are anime films so popular in Japan?

Makoto: It’s a fallacy to think that it is only popular in Japan because if you look globally you already have animation which has huge revenue potential. You see it in Disney or Pixar. A movie like ‘Toy Story’ makes huge revenues. They make a lot more money than a regular feature film and this is not a trend peculiar to Japan. A Toy Story or a Japanese animated film use the same kind of technology but the difference lies a lot on the hand-drawn illustrations. The aesthetics that come with a hand-drawn animation, these are something that could be appealing to a wider range of audience.

Also, when you see something in the form of a picture it stays in our mind because before a child can process words, he can understand a picture. But if you show him a collection of photographs, he will not be able to comprehend what it means and what he’s supposed to make out of it. When you give him a picture book, it’s our introduction about how he should know the world. It’s a sequence that tells us how to look at our world; pictures have that power. I think that power gets amplified in animation.

WION: What prompted you to make a novel adaptation of ‘Weathering With You’?

Makoto: The novel didn’t come first. I had an idea for animation, made the movie and then wanted to keep that in another format so I just made a novel out of it. It is not unheard of in Japan. It’s not very common but not unheard of in Japan to create a novel of your creation. This might sound unusual for a filmmaker but for me words come before the picturisation. There are certain ideas that I want to convey, certain dialogues that come in my mind. Then I think who would these characters be that would want to say that dialogues. That’s how it works for me.

WION: Your film is Japan’s official entry for the Oscars this year in the International Feature Film Awards section. How does it feel? Have you seen India’s entry to the Oscars, ‘Gully Boy’?

Makoto: It’s not that I’m shortlisted. I’m just nominated as a Japanese entry. I haven’t watched ‘Gully Boy’ yet but I have heard about it. I have been wanting to watch it.

As for my film, like a regular movie-goer, I enjoy watching movies but with all due respect I am not moved by the idea of a federation giving an award. It is not something that I really want to achieve. I did not start my career as an animation director, I started it from a gaming company. This is something that I fell into because I loved doing animation. I have never thought of myself as an authentic director. For a person like that, it would be the highest aspiration to get an Oscar but it's not something that I have been thinking about. If you look at me, you’ll know that I am telling the truth. When a person like me is asked to go to a film festival where I have to wear a suit and a necktie, all I can think about is when I’ll be able to go back home.

WION: How big are songs in the ecosystem of Japanese films? Is it anything like Bollywood?

Makoto: Before I talk about other filmmakers I'll tell you about myself. In my movies, you have main characters but my music is another main character. It is equally important. The soundtrack is integrated. I like pop music, certain genres of pop music so I integrate them closely. There are so many songs running through the theme of the movie that sometimes my movies get criticised -- people ask why do you put so many songs into one movie? When people criticise, I tell them I’m going to put more songs into my next film. I have watched ‘Baahubali’ in a theatre. I think that the movie would have been great to watch with a beer. I thought it was fantastic.

WION: Do you think movie theatres stand a chance in the age of streaming platforms?

Makoto: Overall it’s a good thing. Earlier the right to view a movie, screen a movie was held only by a few people. Now we are creating a world where there’s more diversity. We are able to create content that can be watched by anybody who wishes to watch it. This diversity is a good thing.

As far as movie theatres go, they are a lovely ecosystem from a filmmaker’s perspective. It is a place where you are cut off from the world, from everyday things. It’s only you and the movie (Talking from the Japanese perspective where you are not allowed to look at your phone while you are watching a movie in a theatre). So when you are in a place like that -- you are alone with the movie, experiencing it. What happens in a Netflix world is that you are sitting at home and when you get a little bored with the content, you start looking at your Twitter feed or do something else. As a filmmaker I love the culture of going to a theatre, a lot of people going to the theatre and experiencing the film together. I hope that remains.

WION: Lastly, is there anything you want to tell your Indian audience as a filmmaker?

Makoto: Rather than my message to the audience, I am really looking forward to the reaction to my film. This film is not something that the Indian audience is used to. It is not Bollywood, it's not Hollywood, it’s something different. I want to see what they discover in it. Finding what they find interesting in my movie will probably give me some sort of a hint about what it is that is a commonality between cultures that draws people to my movies. That might lead to the next inspiration.

Only a couple of films down and Makoto Shinkai has established himself as one of the best Japanese anime directors of the time. He is best known for directing ‘Your Name’, the highest-grossing anime film of all time at the time of its release.