'The Zoya Factor' review: Dulquer Salmaan makes the film worth your time 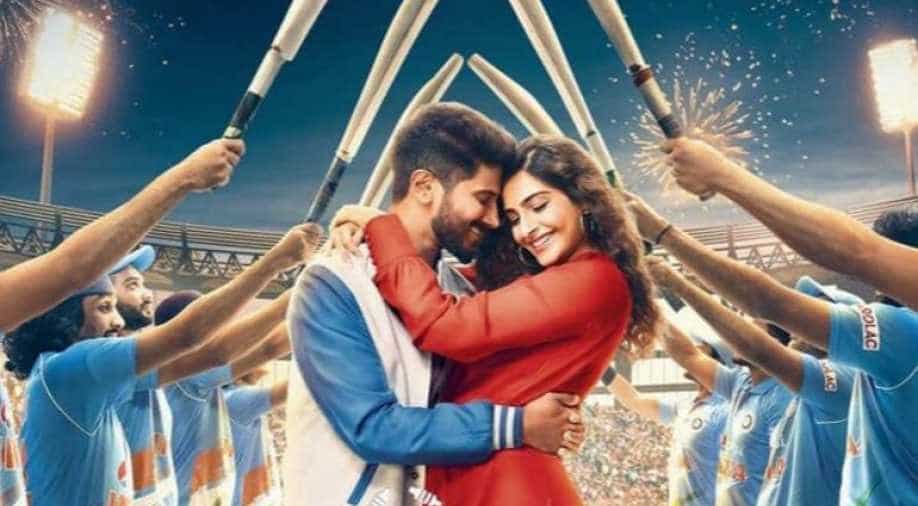 Sonam Kapoor and Dulquer Salmaan in a still from 'The Zoya Factor' Photograph:( Twitter )

While the film has Sonam Kapoor as the main protagonist, it is the leading man- Malayalam star Dulquer Salmaan who completely steals the limelight as the sharp, charming Nikhil Khoda.

It's is a well-known fact that some of the world's greatest sportsmen follow some rituals, routines when they head out to play a match. Call them superstitious or just habits, many players believe that following those set routines help them bring good luck on the field.

Based on this central theme of luck on the field, director Abhishek Sharma's 'The Zoya Factor' is based a few years back time when India had won the Cricket World Cup only once in 1983. We are told that the same day, the film's protagonist Zoya was born in an Army family obsessed with the game. Having grown up amongst her cricket-crazy brother (Sikandar Kher) and father (Sanjay Kapoor), Zoya may not have been too fond of the sport but has always been aware of how lucky she has been for the two men and their regular matches of gully cricket.

As a junior copywriter of an ad agency, she is sent to Sri Lanka to conduct a photoshoot for the Indian Cricket Team. Zoya's clumsy ways charm the captain, Nikhil Khoda (Dulquer Salmaan) to such an extent that he ends inviting her to have breakfast with the team one day. Conversations on the table eventually lead to Zoya admitting how her family considers her lucky and the men in blue- already low on confidence and luck thanks to multiple defeats in recent matches-  believes her and even wins that day's match.

Nikhil, a star player, though does not believe in luck and feels hard work and team spirit can make his boys win but finds himself drawn towards Zoya. And while the Nikhil and Zoya find themselves falling for each other, the rest of Indian cricket team wants her for all their matches as their lucky mascot.

Does Zoya leave a lucrative offer for her love for Nikhil or does she instead, be the lucky charm of a team that desperately needs to pull up its socks for the upcoming world cup forms the rest of the story.

Based on Anuja Chauhan's very popular novel by the same name- the premise is light and of course, make-believe. The story has all the right ingredients to make for a perfect rom-com. A Mills&Boons kind of love story, plotting villains in the form of cricketer Robin and his selector uncle Joginder who just want to the couple to be apart, some funny moments and of course cricket. Yet, the film only comes together in parts with the first half being rather slow and unexciting. The story picks up only in the second half, especially near the climax thanks to the action on the filed and two hilarious voice-over artists who deliver the best lines as commentators. From comparing the low run rate to Aadhar card application process to 'Baahubali' inferences- the commentary during the matches draws in the maximum laughs.

While the film has Sonam Kapoor as the main protagonist, it is the leading man- Malayalam star Dulquer Salmaan who completely steals the limelight as the sharp, charming Nikhil Khoda. Salmaan made his debut in an uninspiring road movie 'Karwaan' in 2018 and in his second Bollywood outing, he hits it out of the park with his performance. Be it as the confident player who is sure of his talent more than Zoya's luck or even as the vulnerable player who reluctantly admits to Zoya that maybe after all it's only her luck that's taking the team ahead- Salmaan is pitch perfect.

Sonam on the other hand fumbles in many of the comic moments and her act reminds you of her role in 'Khubsoorat'- in which she appeared a lot more confident of her performance. In 'The Zoya Factor', Sonam on several occasions tries too hard to play the damsel who is just stuck in an unfathomable situation. She and Salmaan, though, look great together and its always nice to see such a good looking couple in a movie full of cliches, mush and luck of course.

The supporting cast is quite impressive especially Angad Bedi as the angsty ex-captain Robin and Sikandar Kher as Zoya's goofy, protective brother. The film's best moments though are on the field not watching a very predictable match but listening to the hilarious commentary in the background.

Does 'The Zoya Factor' work ultimately? Strictly because of Dulquer Salmaan and the two commentators.  It has more misses than hits but Dulquer effortlessly sails through choppy writing to make the film an enjoyable watch. It is ultimately 'the Dulquer factor' that works for the film.