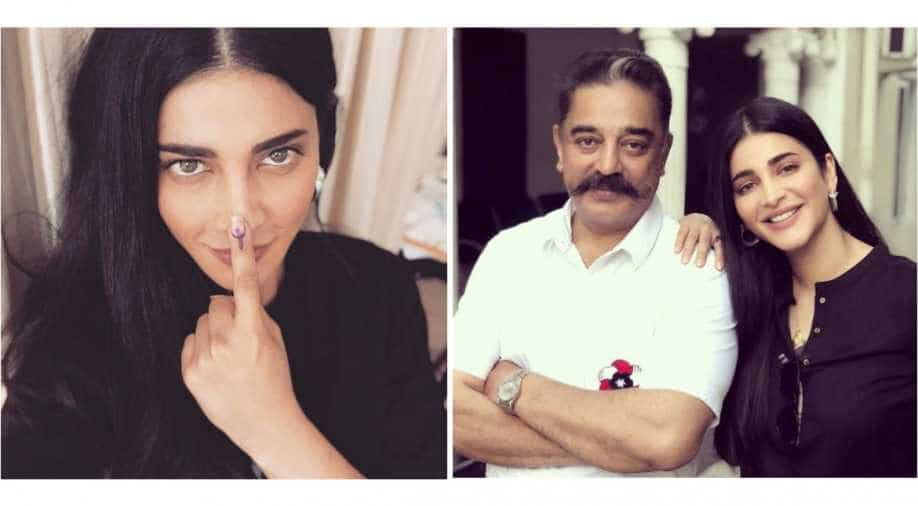 Shruti got up pretty early and tweeted to her fans urging them to use their constitutional right and vote today.

As the second phase of the Lok Sabha election started today, actor and politician Kamal Haasan was seen with daughter Shruti as they became early voters in Tamil Nadu.

The father-daughter duo was seen in a queue in the morning today outside a booth in Chennai. Shruti got up pretty early and tweeted to her fans urging them to use their constitutional right and vote today. Read her tweet here:

Today is the day !! Vote because it matters !

The two also featured in her Instagram posts after they exercised their right. In one, Shruti showed her ink stain while in another she posed a pretty picture with father.

Vote for the change you want to see ! #everyvotecounts

She wrote: "Vote for the change you want to see!"

Kamal Haasan has entered politics by forming a new party Makkal Needhi Maiam (MNM) that is debuting in the election. He has put up candidates in all 39 Lok Sabha seats and the bypolls as well, hoping to make a dent in the vote share.

This is the first major election in Tamil Nadu after the death of towering personalities of state politics, DMK patriarch M Karunanidhi and AIADMK chief J Jayalalithaa.