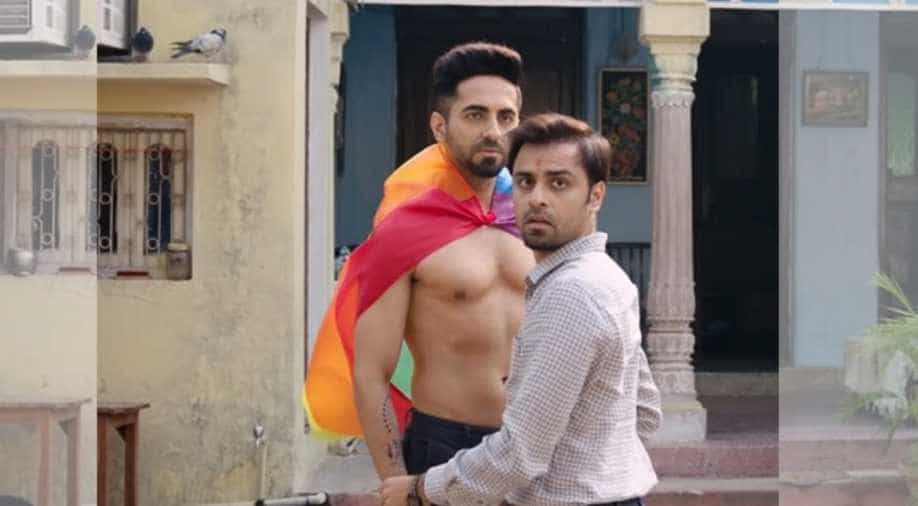 Shubh Mangal Zyada Saavdhan' takes the homophobic society head-on- but not once does it become preachy.

The best thing about this week's release 'Shubh Mangal Zyada Saavdhan' featuring Ayushmaan Khurrana is that writer-director Hitesh Kewalya completely avoids all kinds of stereotypes while narrating a same-sex love story. Bollywood, for decades, has been guilty of stereotyping gay characters, making them look caricaturish and effeminate. Why does a man have to be effeminate to be gay? To an extent, Bollywood's depiction has also hampered the way society perceives the gay community.

In 'Shubh Mangal Zyada Saavdhan', the only quirk that Kartik (Khurrana) has is that he is filmy and overdramatic. Sporting a nose ring suits his flamboyant character, he is the more vocal about love than his live-in partner Aman (Jitendra Kumar). The two land in Allahabad at Aman's sprawling residence during a wedding. Kartik wants Aman to come out to his parents (Gajraj Rao and Neena Gupta) and the latter is reluctant because he knows they will not take the news well.

In Pics: From 'Fire' to 'Shubh Mangal Zyada Saavdhan': Tracing the journey of LGBTQ films in India

When he finally comes out to them- he explains his emotions for Kartik with chemical terms-dopamine, oxytocin, and hypothalamus just so that his scientist father understands what exactly he feels about his boyfriend. And while the examples are apt- the conventional parents are still not convinced and opt to ridiculous tropes to 'cure' Aman and his 'illness'. They perform pujas, fix his wedding to the neighbour's daughter (TV actress Pankhuri Awasthy in a delightful debut performance) and try out all sorts of tricks to get their son back.

The brilliance of Kewalya script is that the jokes not on the homosexual couple but on the scandalized, homophobic society at large which just can't fathom a boy falling in love with another boy. It also helps that he uses ample examples from famous Bollywood love stories- especially DDLJ- to depict a gay love story - to normalize it for the audience.

Bollywood, in fact, plays an integral part in the film- lots of references to Amitabh Bachchan and his films, it also parodies the viral dialogue from 'Race 3' to its convenience and delivers laughs in plenty.

While the first half has some brilliant lines and moments, the second half is tad scattered when the story suddenly shifts focus from the two lovers to the warring family and their stories. There are side stories about the parents' sex life, about the elder cousin not able to find a groom and hence being frustrated, and the father's bullying attitude for his young brother, Chaman Chacha (Manu Rishi ) which take up the narrative space. Individually these tracks are great - but in the film - after a point of time they make the screenplay look scattered and stretch the narrative unnecessary.

Neena Gupta and Gajraj Rao as the dishevelled parents are great. The pair, who marvelled us in 'Badhai Ho', play strikingly different characters from that film. Rao is the villainous, disapproving father who cannot come to terms with his son's sexuality and while he gets several funny moments of his own- his character has its limitations due to the conventional portrayal of the father. Neena Gupta, though, is splendid as the honest, straight-talking mother. So are Aman's uncle and aunt played by Manu Rishi and Sunita Rajwar as the four actors bring authenticity to their characters.

The film, of course, rests on Ayushmann Khurrana's able shoulders. Another film that goes in the list of the actors socially relevant films- 'Shubh Mangal..' has Khurrana playing an over the top character who uses Bollywood references to drive home a point. He is dramatic AF, loves his guts but loves Aman more so can go all out to fight the disapproving father. Ably supporting him is Jitendra who, has created a niche for himself on the web in the past year, and delivers a restraint performance in this film. He is the calmness to Khurrana's character and the two men together effortlessly turn into lovers who are ready to fight it out with the world and more importantly with the family.

There have been certain films in Bollywood that have lead characters as gay. 'Shubh Mangal Zyada Saavdhan' takes the homophobic society head-on- but not once does it become preachy. With humour, familial love and equal portion hate- the film tries to normalise same-sex love story.

It's a great time for cinema in India. In the 1990s, a film on a lesbian couple (Deepa Mehta's 'Fire') had led to much uproar with political parties objecting to two women getting intimate on-screen. From then to now- where India's most bankable star shares a passionate kiss with a man on screen- India seems to have grown up.