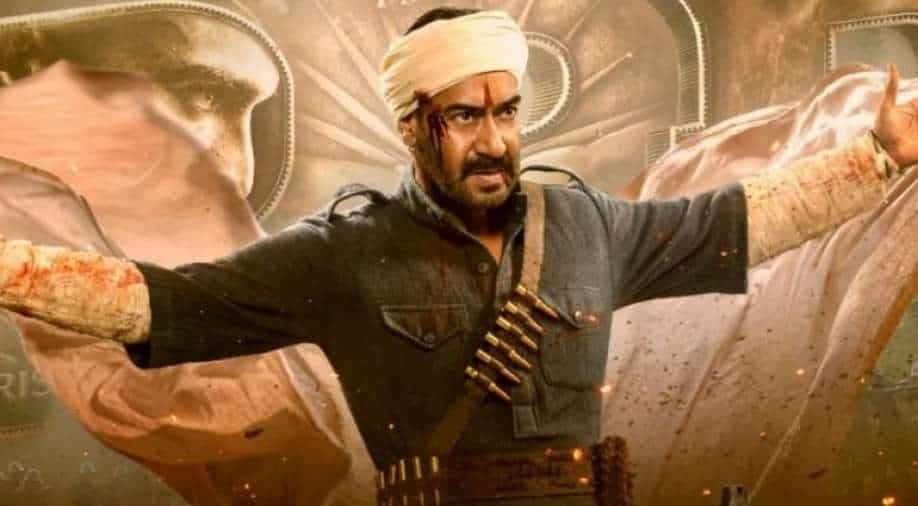 Helmed by `Baahubali,` director SS Rajamouli and produced by DVV Danayya, the much-talked-about film `RRR,` will release in multiple languages on October 13 this year.

After much anticipation, the first look of Ajay Devgn from SS Rajamouli's  'RRR' is finally here on the actor's 52nd birthday.

On Friday, the makers have released the first look of Devgn's character in a motion poster.

Turning the occasion into a more special event, the team of RRR dropped the first look as a special gift for the fans of the actor. Taking to Instagram, Devgn thanked Rajampoli and wrote, "Thank you @ssrajamouli for envisioning me in such an exciting and powerful character"

The actor had previously raised the excitement among his fans with a post two days ago. Revealing that his first look will be out on his birthday, Ajay had said that he can't wait to show how filmmaker SS Rajamouli has etched his character.

"It has been an exciting experience being part of @RRRMovie! I can’t wait to show all of how @ssrajamouli designed my character  #AjayDevgnKaFiRRRstLook,” read his post on social media.

Ajay is not the first actor from the RRR cast, whose first look is being released on his birthday. Previously, Alia Bhatt and Ram Charan's first looks, too, were also unveiled on their respective birthdays. Apart from the three actors  Rajamouli's pan-India magnum opus also stars Jr NTR, Samuthirakani, Olivia Morris, Alison Doody, and Ray Stevenson in lead roles. As per reports, the film is a fictional story set in the 1920s pre-independent era. The film is based on the lives of two freedom fighters — Alluri Sitarama Raju and Komaram Bheem.

The film was earlier slotted for a release on July 30, 2020, but owing to the COVID-19 pandemic and the injuries suffered by actors Ram Charan and Jr NTR during production, the film had to be delayed.

Helmed by `Baahubali,` director SS Rajamouli and produced by DVV Danayya, the much-talked-about film `RRR,` will release in multiple languages on October 13 this year.