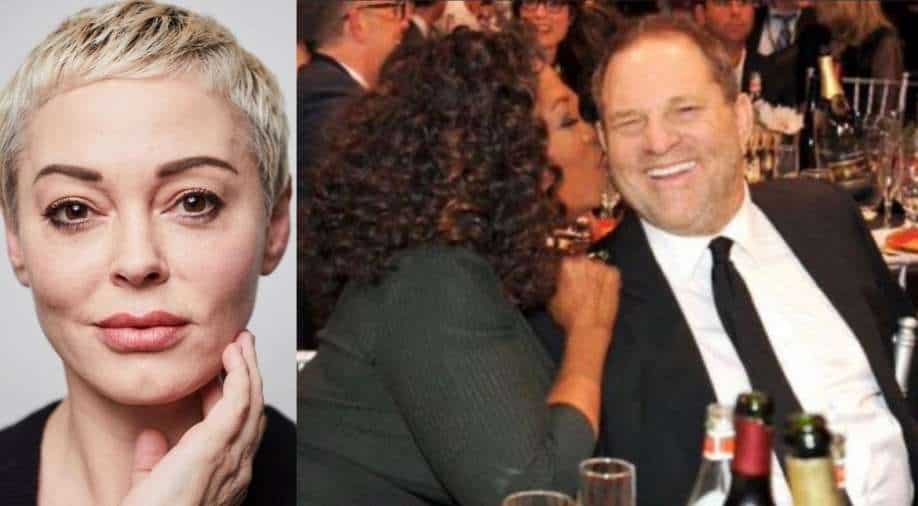 Rose McGowan, who was one of the early #MeToo activists, has lashed out at TV show host Oprah Winfrey.

The 47-year-old actor called out Oprah while posting a Twitter photo of the talk show host kissing on the cheek of convicted rapist Weinstein.

I am glad more are seeing the ugly truth of @Oprah. I wish she were real, but she isn’t. From being pals with Weinstein to abandoning & destroying Russell Simmon’s victims, she is about supporting a sick power structure for personal gain, she is as fake as they come. #lizard pic.twitter.com/RCuXNpWCU0

The picture was reportedly taken at the 2014 Critics` Choice Movie Awards. Rose wrote alongside the photo, "I am glad more are seeing the ugly truth of @Oprah. I wish she were real, but she isn`t. From being pals with Weinstein to abandoning & destroying Russell Simmon`s (sic) victims, she is about supporting a sick power structure for personal gain, she is as fake as they come. #lizard."

Rose's comments comes days after one of Oprah`s past interviews with Dolly Parton went viral over the weekend.

Social media users discussed Oprah`s questions, including one in which she asked the country artist, "You`ve been open that you`ve had some work done, some tucks and pulls and sucks."

Dolly jovially replied, "Yes, I have and I`ll have some more when I need them."

The two women also discussed Parton`s experience with depression, with Oprah remarking that she heard Dolly went into a "huge depression" when she turned 40.

"That wasn`t cause I turned 40, it was cause I was fat and 40," the `Steel Magnolias` actor joked, before adding, "I really had a lot of problems at that time, a lot of female problems. Just hormones... But I`m okay now, it was one of the best things to ever happen to me because it made me take inventory."

A Twitter user remarked, "I feel like Oprah wanted her to be embarrassed but ms dolly said nope."

The clip sparked a wider discussion of Oprah`s former ties to Weinstein and Russell Simmons, who have both been accused of sexual misconduct. In January 2020, Oprah announced she would no longer be an executive producer on a then-untitled documentary from Kirby Dick and Amy Ziering, which highlighted the stories of Simmons` accusers.

She cited her opinion that "there is more work to be done on the film to illuminate the full scope of what the victims endured, and it has become clear that the filmmakers and I are not aligned in that creative vision."

"I have great respect for their mission but given the filmmakers` desire to premiere the film at the Sundance Film Festival before I believe it is complete, I feel it`s best to step aside," she continued."I will be working with Time`s Up to support the victims and those impacted by abuse and sexual harassment," she added at the time.

From 2017 to 2019, Simmons was accused of rape and sexual misconduct by at least 15 women. Jennifer Jarosik accused the producer of rape in a January 2018 lawsuit but she and Simmons filed a joint stipulation of dismissal with prejudice in April.

At the time of Jarosik`s filing, Simmons issued a statement, saying in part, "This allegation is absolutely untrue. I look forward to having my day in court--where, unlike the court of public opinion, I will have the ability to make use of fair processes that ensure that justice will be done and that the full truth will be known."

A Jane Doe went on to accuse the producer of rape in a separate lawsuit. However, the case was dismissed by the judge because of the statute of limitations.

In a previous statement addressing Doe`s accusations, Simmons said, "I vehemently deny all these allegations. These horrific accusations have shocked me to my core and all of my relations have been consensual."

Regarding Oprah`s prior friendship with Weinstein, the talk-show host said she "didn`t know" about his alleged behaviour toward women, including Rose, who accused the producer of rape, but acknowledged knowing about his notoriously aggressive style.

"I was in Chicago, in my own little world, but what I knew about Harvey was that Harvey was a bully and that if Harvey`s on the phone," she explained in 2018, "you didn`t want to take the call because you`re going to get bullied in some way."

Harvey has since been found guilty of rape in the third degree and criminal sexual act in the first degree. He`s currently facing additional charges in a Los Angeles court and has pleaded not guilty.