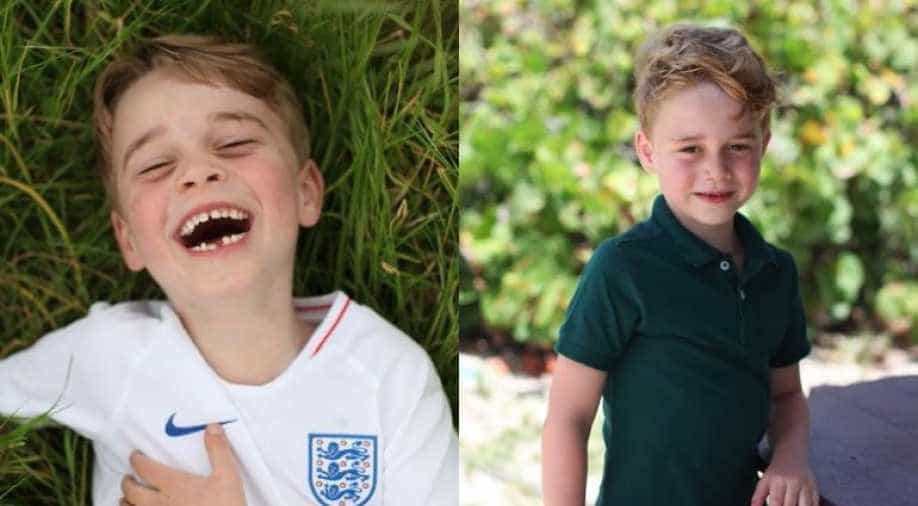 Duke and Duchess of Cambridge are planning to throw a big birthday bash for Prince George Photograph:( Twitter )

The photos were taken by Kate Middleton in the garden at the royal family`s London home.

Prince George is now 6-years-old! The birthday boy shows off his missing teeth in photos released on social media to mark his 6th birthday on Monday.
A series of pictures, taken by his mother Kate Middleton, Duchess of Cambridge, features the little prince flashing a cheeky grin for the camera, dressed in Nike team England football shirt.

The photos were taken in the garden at the royal family`s London home.

"Happy Birthday Prince George! The Duke and Duchess of Cambridge are very pleased to share new photographs of Prince George to mark His Royal Highness`s sixth birthday. This photograph was taken recently in the garden of their home at Kensington Palace by The Duchess of Cambridge. Thank you, everyone, for all your lovely messages!" the caption alongside the photos posted on Instagram read.

The royal couple is planning on throwing a grand birthday bash for their eldest child."The Duke and Duchess of Cambridge have gone all out to organize a birthday party for George. Kate has done most of the organizing herself," Us Weekly quoted a source as saying.

According to media reports, the party will take place at Kensington Palace and will be attended by George`s closest schoolmates, and younger siblings - Princess Charlotte (4) and Prince Louis (13 months).

The insider also revealed that the couple is also hiring a magician to make the Prince`s big day even more special."George loves magic," the source asserted.

For the menu, caterers are instructed to prepare pizza, pasta, sliders, cupcakes, candy, and ice cream.