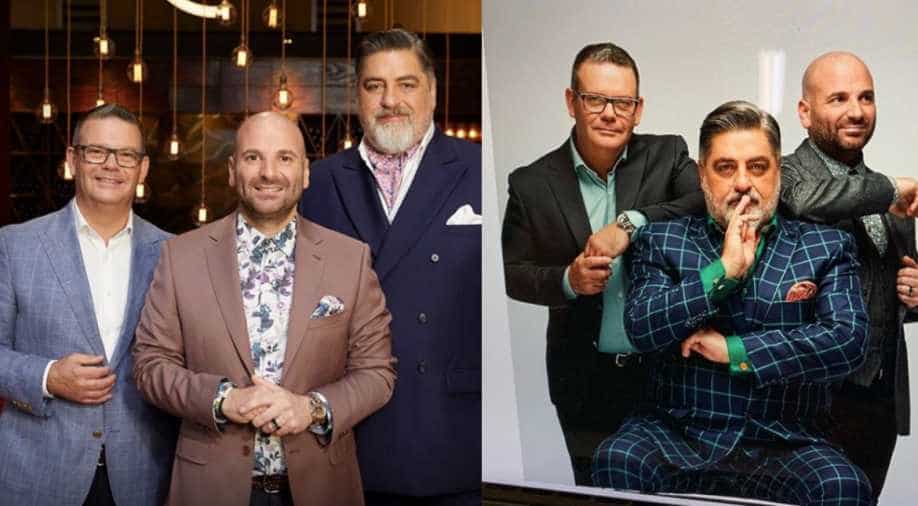 The announcement was made on Instagram ahead of the telecast of the season finale.

One of the most loved cooking shows in the world, Masterchef Australia is now bidding goodbye to iconic celebrity chefs  Matt Preston, Gary Mehigan and George Calombaris, who have been part of the show for eleven seasons.

The announcement was made on Instagram ahead of the telecast of the season finale. The post read, “After 11 sensational seasons, we bid a fond farewell to our judges - Matt Preston, Gary Mehigan and George Calombaris. For more than a decade, #MasterChefAU has celebrated Australian food and made the culinary dreams of everyday home cooks come true. We thank Matt, George and Gary for being a part of this remarkable MasterChef legacy!”

After 11 sensational seasons, we bid a fond farewell to our judges - Matt Preston, Gary Mehigan and George Calombaris. For more than a decade, #MasterChefAU has celebrated Australian food and made the culinary dreams of everyday home cooks come true. We thank Matt, George and Gary for being a part of this remarkable MasterChef legacy!

This news comes after one of the judges, George Calombaris came under fire for reportedly underpaying 515 current and former staff at his restaurants by a whopping AUD $7.8 million. The channel Network 10 where Masterchef Australia airs, however, backed George. A spokesperson was quoted, “George and MAdE Establishment have reached an agreement with the Fair Work Ombudsman in relation to this matter. George has the support of Network 10.”

The controversy first surfaced in 2017 when it was estimated that 162 workers had been underpaid by $2.6 million due to “historically poor resources.”

According to latest reports, Network 10 CEO Paul Anderson said that this decision was made as the network and the trio had not been able to agree to a commercial agreement that was satisfactory to the judges.

Meanwhile, as for the underpayment scandal, George was ordered to pay $200,000 which he would have to pay as “contrition payment”. He is also mandated to make public statements to encourage compliance with the Fair Work Act.

He also issued a statement: “We apologise to all our affected team members, past and present – as it is our people that make our restaurants great, and it is our priority to ensure all of our employees feel respected, rewarded and supported in their roles.”

The other judges too issued statements on their social media. While Gary and Matt said that they could not agree with Network 10 on all the conditions of the new contract for 2020, George said that their "dates didn't align."

@masterchefau geez you have warmed our hearts, filled our stomachs and sizzled our souls. To the great contestants of the past 11 years, you ought to be proud. To the incredible @masterchefau team that works so hard to make the best cooking show on earth, we salute you. To our families, friends and teams who have supported us, you freakin’ rock. We were close to signing a new contract for season 12 however the dates just didn’t align. Channel Ten, thank you for providing us the platform to change the landscape of food worldwide. To the next 3 judges and mentors, we wish you loads of success. To my brothers @mattscravat and @garymehigan: I love you and thank you. Time to take a deep breath and be thankful. With love GC 🧿 xxx

To all of our fans ‘thank you’ To the team that makes MasterChef ‘thank you’ and to all of the contestants that we know and love, we are all part of a very exclusive club and what a journey what an experience. To explain: ‘It was time to move on, have more free time to explore our own creativity’ It was never about the money and never will be about the money. We couldn’t agree on the term of the new contract for 2020 and season 12. Something we felt very strongly about. The opportunity to work with Matt and George has been a blessing and something I cherish. Working together will continue to be the most important thing for us.....the three musketeers.......🤗 @mattscravat @gcalombaris @masterchefau #masterchefau #foodies #foodiesofinstagram #homecooks #homecooking #masterchef

Thank you so very much for supporting @masterchefau over the last 11 years. We have loved every single moment. It is however with a heavy heart that I can confirm that season 11 was our last. We were really keen to continue but we were unable to agree to all terms for the new contract. We have enjoyed 11 wonderful years on Masterchef Australia with Network Ten, and I want to take this opportunity to thank Ten for this amazing opportunity and for Network Ten’s backing of this very special show. We have met some beautiful people, discovered and guided some of the brightest up-and-comers in the Australian food scene, worked with the best chefs in the world in front of the camera, and with the TV industry’s finest professionals behind the scenes. And of course, we three judges have formed a lifelong friendship that will live on far beyond the show. I want to take this opportunity to thank you and everyone who has shared our amazing journey with us - especially all those fantastic contestants. I look forward to sharing many more adventures with you in the future. And finally I wish the new judges all the best with the show that we love so much. Thank you all. I don’t want to take any gloss off tonight’s well deserved winner so I will not be making any further comment. Love Matt.