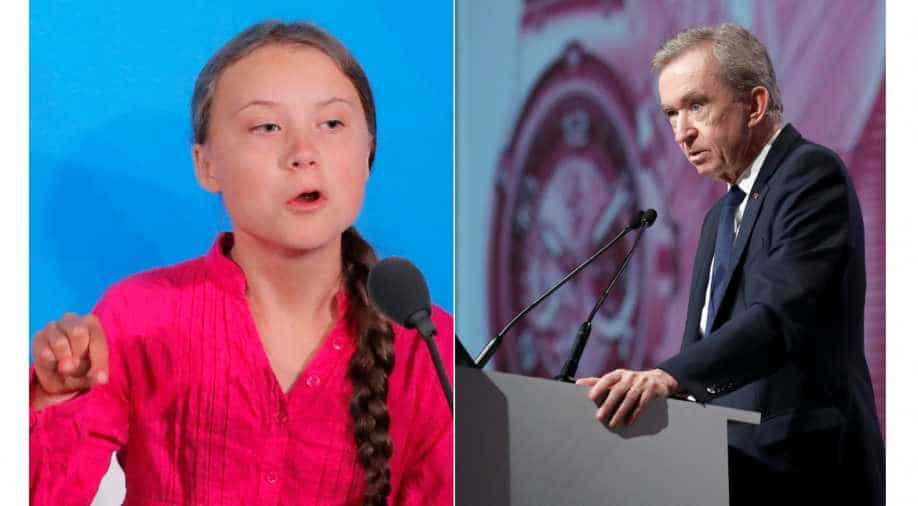 LVMH, the world's biggest luxury goods conglomerate, said it was further cutting emissions and improving sourcing on materials like animal fur. But the group's billionaire owner and CEO Bernard Arnault said he rejected what he called Thunberg's doom-mongering.

LVMH, the world's biggest luxury goods conglomerate, which like its peers is seeking to improve its environmental credentials and keep young consumers onside, said it was further cutting emissions and improving sourcing on materials like animal fur.

But the group's billionaire owner and CEO Bernard Arnault said he rejected what he called Thunberg's doom-mongering.

The 16-year-old Swedish campaigner berated world leaders and business executives at a United Nations climate summit in New York this week for failing to act more decisively on climate change, saying they had "stolen her dreams."

Her vision "has a demoralising side to it for young people. She's not proposing anyway, aside from criticism," Arnault, 70, told journalists. "I prefer positive solutions that allow us to get towards a more optimistic position."

Fashion and textile groups are under pressure from consumers and environmentalists to try and reduce industrial waste, including unsold clothing, and improve their manufacturing methods.

Luxury companies turn out pricey products that are not mass-produced, but they also face questions on everything from animal welfare to carbon emissions involved in exporting their wares around the world.

Many LVMH fashion brands, which include Fendi, Christian Dior and Givenchy, make accessories such as handbags from exotic skins like python or crocodile.

The group said it was bringing in a charter to ensure full traceability for all of its raw materials by 2025, which would allow it to track them back to precise farms in the case of farmed fur.

LVMH said it was on course to exceed its goal to cover 30% of its energy needs from renewable sources by 2020 and also on track to cut its CO2 emissions by 25% by the same time.

The group was glaringly absent from an industry "fashion pact" launched under the auspices of Kering in August with broad targets to reduce emissions.

Stella McCartney, a pioneer in vegan-friendly fashion and whose namesake brand is now part-owned by LVMH, also backed the agreement.

Arnault said the deal did not make sense for LVMH - beyond clothing brands it also owns champagne labels like Moet & Chandon - and that its business model was a world away from that of fast fashion firms.

Younger luxury consumers - including the "millenials" in their late 20s and mid-30s who are driving industry sales - are more readily influenced in their purchases by sustainability matters than their elders, a Boston Consulting Group survey this year showed. Meanwhile, among others Priyanka Chopra praised Greta for her courage.

Kering said earlier this week that it would become fully carbon neutral by offsetting all greenhouse gases from 2018 within the group and across its supply chain.