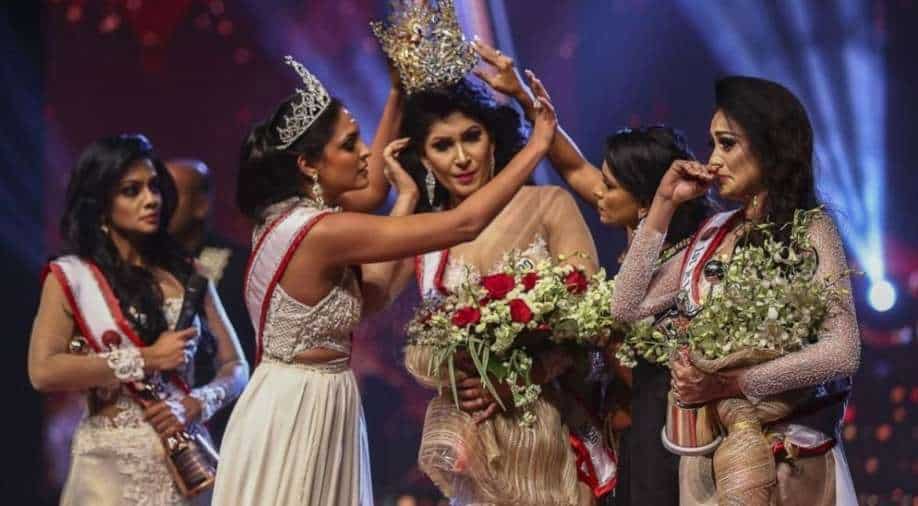 The winner of the Mrs. Sri Lanka pageant later claimed on Facebook that she suffered a head injury and had to be treated in hospital for the incident.

In an incident aired live on TV, the winner of the Mrs Sri Lanka pageant suffered an injury on her head after a struggle for the crown ensued on the stage when the winner was announced.

The incident took place on Sunday when a former beauty queen came rushing back to the stage to take the crown away saying the winner did not deserve it because she was divorced.

In a video that is circulating on the internet, Sri Lanka’s Caroline Jurie, the reigning Mrs World, abruptly rushed to the stage and took the crown off De Silva’s head so she could hand it to the runner-up. She thought De Silva is divorced so Jurie took it on herself to award it to someone else.

After chaos broke out on the stage, Jurie told the audience, “There is a rule that we all have to be married and not divorced, so I’m taking the first step saying that the crown goes to the first runner up.”

Jurie then went over to De Silva and spent several moments struggling to remove the crown from her head. De Silva could be seen rushing off the stage in tears in the video.

De Silva later claimed on Facebook that she suffered a head injury and had to be treated in hospital for the incident.

De Silva also addressed the issue of her being divorced and said that she is living apart from her partner for “personal reasons.”

“We are disappointed,” Chandimal Jayasinghe, head of Mrs. Sri Lanka World, told the BBC. “It was a disgrace how Caroline Jurie behaved on the stage and the Mrs. World organization has already begun an investigation on the matter.”

The pageant is a major event in Sri Lanka. It aired on national TV and the prime minister’s wife was in the audience for the final ceremony.